The Sony Xperia Z is now on sale in the U.S. Sony store, marking the first move by Sony to officially sell the Xperia Z in the states, just ahead of a rumored T-Mobile launch.

Sony is selling the Xperia Z in black, white and purple for an agreeable $629, but users will need to give up LTE if they purchase this model. The Sony Xperia Z on sale is the HSPA+ model supporting 3G and 4G on AT&T and T-Mobile. This is a much better deal than purchasing the unlocked Sony Xperia Z from Best Buy which charges $899.

Users who need faster connections and live in A T-Mobile 4G LTE zone may want to hold off a little longer as an Xperia Z LTE model passed through the FCC on the way to T-Mobile recently. 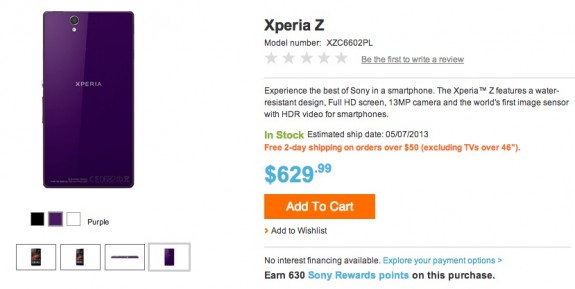 The Sony Xperia Z is available in the U.S. Sony store.

The Sony Xperia Z will start shipping from the U.S. Sony store on May 7th and includes free shipping. There are no two-year contracts available  but users can apply for a Sony card and get a $100 credit with this purchase.

Sony announced the Xperia X at CES 2013 where it took home Gotta Be Mobile’s best smartphone of CES award thanks to the design, waterproof features and close to stock Android.

Even with a slim 7.5mm thick design Sony is able to waterproof the Xperia Z, which offers user the freedom of using the phone near water without worrying about a busted phone. The design will also keep dust out of the phone, and while not every user will be walking through a festival of colors or stuck in a desert, it is a nice feature.

The 13MP Exmor camera sensor can shoot sharp-looking photos and can record in HDR video, which is quickly becoming a standard smartphone feature. Sony also highlights the Auto mode on the Xperia Z which uses scene recognition to detect what you are taking a photo of and adjust the settings appropriately.

The screen of the Sony Xperia Z features the Mobile Bravia Engine 2, which automatically adjusts multiple settings to deliver a better viewing experience based on where you are.

Time will tell if Sony plans to bring the Xperia Z directly to AT&T as well as T-Mobile. For now any hope for a Verizon Xperia Z appears, just like LTE, un-supported.