Recently posted screenshots of a benchmarking tool running on what’s purported to be the Sony Xperia Z Ultra confirm that upcoming device will match the features that had already been rumored including a 6” inch display.

The screenshots, which were posted to the XDA Forums this week, don’t directly indicate that the device is in fact the Sony Xperia Z. Instead the poster only mentions the fact that the device that the screenshots were taken from were a “classified” device, adding that “if you follow the news, the specs would be quite self-explanatory”. 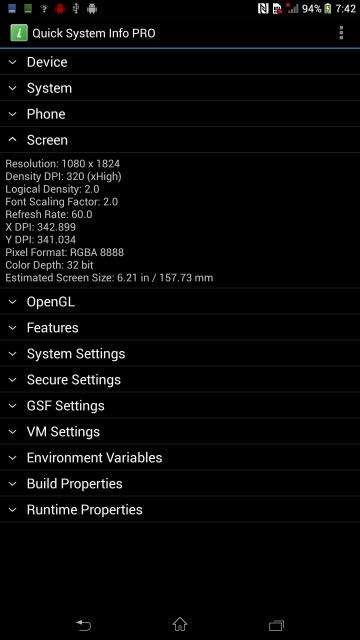 The specifications for the device include a display with a resolution of 1080 x 1824 pixels, and estimated screen size of 6.2” inches, an ARMv7Quard-Core Processor, 16GB of onboard storage and is manufactured by Sony. The settings also indicate that the device is running Android 4.2.2 and has a product name ending with the number 1276-3513.

Recent leaks from ePrice had indicated that the Sony Xperia Z Ultra would ship with 16 GB of onboard storage, and a 6.4” inch Trilluminos display. However, that site also showed the device as having a maximum resolution of 1920 x 1080 pixels which doesn’t completely line up with what these screenshots indicate.

Read: Leak of Xperia Z Ultra Points to the Presence of an IGZO Display

If those earlier leaks were to be believed the Xperia Z Ultra will feature an IGZO display that would allow users to make use of other writing tools in case they lost whatever stylus ships with the device. During a demonstration during this year’s Consumer Electronics Show, representatives indicated that the display technology also results in sony mobile smore accurate touch displays.

The Xperia Z Ultra is also rumored to be completely waterproof up until a certain depth. If it is, it would join the Xperia Z which is water resistant for up to a meter of water for 30 minutes.

Regardless of the rumored specifications Sony Mobile is clearly preparing to launch its own device to take on the large screened phones of other Android rivals like Samsung’s Galaxy Note 3. An invitation sent out to Xperia Blog this past week featured a device and stylus, reminding those invited to “not forget to mark [their] calendars”.