After AT&T Mobility had announced that the Samsung Galaxy Mega will be landing on store shelves by Friday with its 6.3-inch display, it looks like Sony is poised to give the mega a challenge with its 6.4-inch Xperia Z Ultra phablet. Though neither Sony nor AT&T is confirming that the Xperia Z Ultra will be hitting the carrier’s airwaves in the U.S., recently revealed FCC documents show that the handset bears support for AT&T’s 4G LTE bands. In addition to LTE, the device also has compatible bands for AT&T’s HSPA+ network as well for areas where LTE isn’t available.

And while Samsung’s Mega is a mid-range phablet with a more affordable price tag, the Xperia Z Ultra will bring some of the best specs available on the market today. It will have a higher resolution 1080p full HD display with Sony’s Triluminos screen technology, a waterproof and dustproof body that’s slim and sleek like the Xperia Z smartphone, an 8-megapixel rear-facing camera, and a high-end Snapdragon 800 processor. 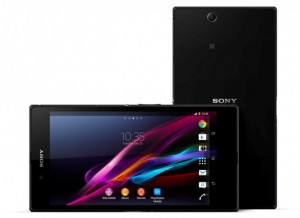 Despite the FCC registration for the Ultra reported by Engadget, it’s still unclear if and when AT&T will announce the tablet for the U.S. market. Given the more high-end specs, the device may be a closer competitor to the Samsung Galaxy Note 3 series rather than the Mega, despite that the latter handset has a screen size that more closely matches the Xperia Z Ultra’s. Additionally, both the Note 3 and the Ultra will support a digitizing stylus, making them more suited rivals.

Both the Ultra and the Mega display sizes put these phones closer in competition to smaller 7-inch tablets, like the recently refreshed Google Nexus 7 slate for this year. However, the Mega and Ultra would benefit in being an all-in-one device with the capability of making phone calls. Thus far, tablets in the U.S. market are stripped of their voice calling capabilities and are used solely for data.

Sony will be hosting a press conference on September 4th in Berlin a few days ahead of the IFA trade show. The date would be the same day that Samsung is widely believed to be announcing the Galaxy Note 3 and the Galaxy Gear smartwatch. Sony’s press conference is believed to be the venue where the Japanese electronics giant will be introducing its camera-centric Honami smartphone.

The smartphone market is definitely heating up with some lust-worthy devices to look forward to in the second half of this year.