When the Sony Xperia Z2 tablet review unit arrived earlier this month I put down the iPad Air and started using this sleek, beautiful and waterproof tablet as my primary tablet. It quickly fell into rotation as my go-to tablet. I used as a personal hotspot while on the go and it was my primary screen for watching movies, including the seven recent releases that Sony includes free for Xperia Z2 tablet owners.

The Sony Xperia Z2 tablet is waterproof in up to 5 feet of fresh water for 30 minutes. This makes it the perfect device to study up on Fantasy football picks while in a hot tub or to do a little early morning work and email while enjoying coffee in the hot tub. It also makes the tablet ideal for use in the kitchen, at a pool or to take to the beach, since it is also protected against dust.

I cannot use the iPad in a hot tub without a special case or a plastic bag cover, which then makes the device thicker and hampers the user experience. Even though the Xperia is waterproof, it is very thin and light, with a very good overall design and feel — although the bezels are a little larger.

The unit sent for review is the Verizon Sony Xperia Z2 tablet with 4G LTE. Verizon also offers a 4G LTE iPad Air. Two great things about using a Verizon 4G LTE tablet like the Xperia Z2: the first is the ability to use it as a hotspot without worrying about the fast battery drain that an iPhone or Android device experiences and the second is the ability to use connected apps anywhere without finding WiFi or using your phone as a hotspot.

The Verizon Sony Xperia Z2 tablet is $599 without a contract and $499 on a two-year contract. For this price you get 32GB of storage, which makes it comparable to the WiFi iPad Air pricing. The 4G LTE iPad Air is $629 off contract or $529 with a two-year contract, for the 16GB model. Verizon offers a bundle that includes free Sony Noise-Canceling headphones.

The Sony Xperia Z2 Tablet features a 10.1-inch display with a 1920 x 1200 resolution that is lower than the iPad Air, but still suitable for watching HD video and playing games on this tablet. 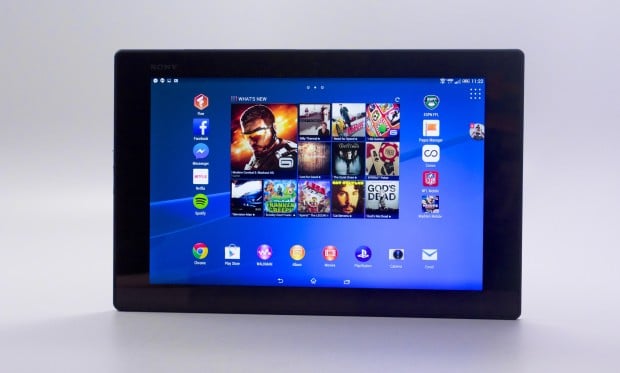 Sony includes a Triluminous display that includes X-reality. This is a fancy way of saying the tablet’s display can boost colors to deliver better looking movies, videos and photos without going too far. Sony leverages the tech it perfected over years of HDTV production to deliver a solid display in the Z2 tablet.

Display brightness is good, but not as bright as the iPad Air in full brightness. Although the resolution on this screen doesn’t match the iPad Air’s 2048 x 1536, the screen is still a pleasure to look at for long periods of use.

Sony delivers an appealing Xperia Z2 Tablet design that isn’t metal like the iPad Air, but still feels like a premium device. The fact that this thin and light device is also waterproof further enhances the appeal. Thanks to the waterproof design there are port covers that can be annoying to deal with, but thankfully the headphone jack is not covered. 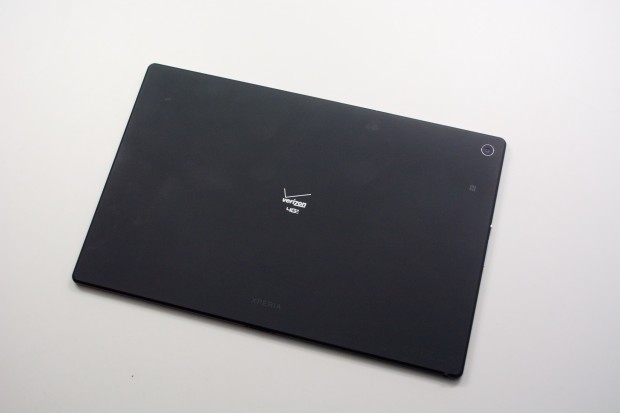 Sony delivers a thin and light design on this water-proof tablet.

With a widescreen display the tablet is taller than the iPad Air when held in portrait mode, but the tablet is not too big to use. Many times widescreen tablets with 10-inch displays are too wide to easily use, but the light weight and thin design overcome this potential problem on the Z2 tablet.

Overall the Xperia Z2 looks and feels like a premium tablet. The only drawback to the soft touch back is that it shows fingerprints very distinctly.

The Xperia Z2 Tablet  packs in a beastly 2.3GHz Quad Core Snapdragon 801 processor and 3GB of RAM as well as 32GB of onboard storage and a MicroSD slot that can expand storage up to 128GB. 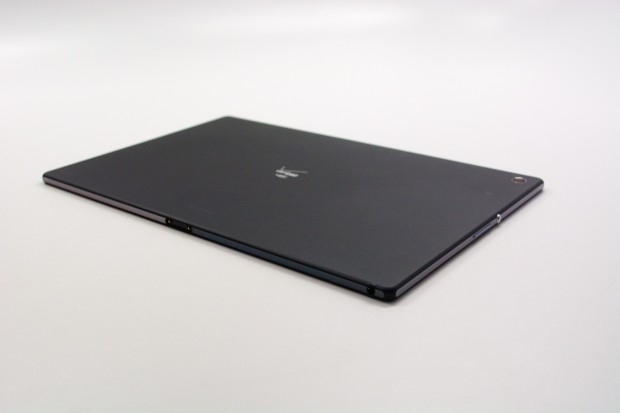 Performance is great, but the speakers are lackluster.

Simply put: this device is powerful. From games to videos and even when running a lot of apps, I didn’t find any combination that slowed the Xperia Z2 tablet down during testing.

With 4G LTE the Xperia Z2 Tablet delivers connectivity anywhere and users will enjoy the same fast speeds as on a 4G LTE smartphone.

The Xperia Z2 Tablet speakers are a major let down, though. Not only is the volume to low to be enjoyable in a small room, the playback is too muddy and you lose details in any music you listen to. You definitely need headphones or a good Bluetooth speaker with this tablet.

Xperia Z2 Tablet battery life is good, but you’ll need to move a port cover to charge it.

I am surprisingly impressed with the Xperia Z2 Tablet battery life. Just like on the iPad I can charge the tablet up and use it heavily for days without worrying about plugging in. Sony promises up to 14 hours of battery life which is a little generous. With medium to high brightness and a mix of activities, including video play, back the Xperia Z2 Tablet battery life averaged about 10 hours of use. This is similar to the iPad Air and I like that it manages standby time well, which is not something all Android tablets manage.

The Xperia Z2 Tablet includes an 8.1MP camera on the back and a 2.2MP camera on the front of the device. They both deliver okay photos in good lighting, but overall I am not impressed. Even the photos shot from the 8MP rear facing camera do not deliver enough detail in the image to use as a primary camera.

In the photo above there is no definition of the hair on our poodle, leaving this photo barely worth sharing on Facebook, let alone keeping for a bigger purpose later. The Xperia Z2 Tablet video sample below shows a better overall look. If you plan to use the cameras to shoot 1080P video or to video chat with the front facing camera you’ll be happy, but this isn’t going to be a primary camera.

The Sony Xperia Z2 Tablet runs Android 4.4 with a Sony skin on top that makes the tablet look more like the interface you see on a Sony HDTV or the PS4, at least in visual effects. You can still run standard Android apps and access Google Play and Gmail. 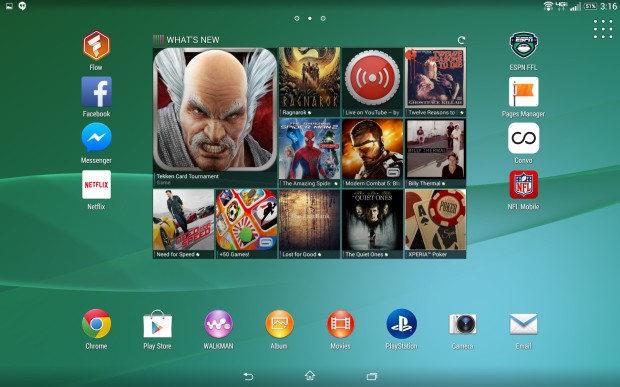 Sony changes the look of Android on the Xperia Z2 tablet.

Although this is not stock Android the changes are for the better in many ways, including fast access to options in the multitasking menu and special apps that let you use the Xperia Z2 Tablet as a remote control and more.

On thing that is very tough to get used to is the fact there is no way to turn off the vibration for notifications. I had to turn the tablet completely off at night or a Google Hangout message would vibrate the tablet, waking myself an my wife up. I looked through all the settings and even with notifications as quiet as can be the vibrations would not stop. 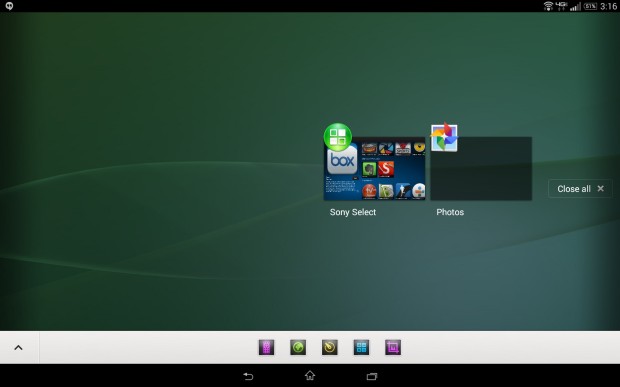 In addition to Sony apps and a remote you can access favorite apps in the multitasking menu, with options to choose the apps you want shortcuts to.

Sony desperately needs to add in a do not disturb like feature and an option to completely silence notification sounds and vibrations.

After using the Xperia Z2 Tablet as my main tablet it is clear that this delivers an experience comparable to the iPad Air. There are still some apps that look better on the iPad Air, but overall I didn’t run into any major issues while switching to this tablet. 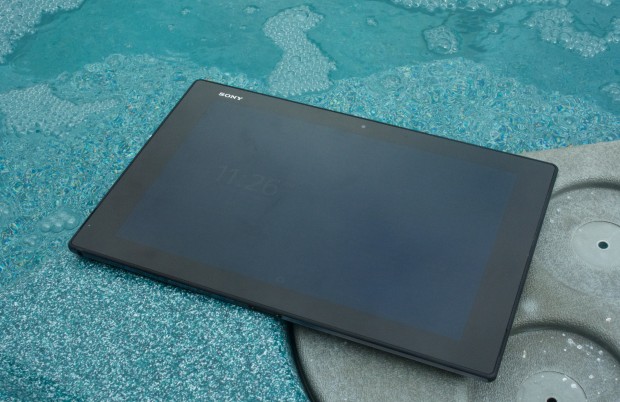 The Sony Xperia Z2 Tablet can go places the iPad cannot, delivers great battery life and a good screen for apps and entertainment.

The widescreen display makes watching movies and HD TV shows a nicer experience and the free entertainment options are also a nice touch.

I am most excited about the Xperia Z2 Tablet water proof feature, even after weeks of use. I love the ability to take the Xperia Z2 tablet anywhere I go without worrying about water or dust.