While perusing my feeds this morning, I came across this little item in a link from Tablet PC Talk.

This is not only cool, it is pretty possible with today’s technology, at least most of the goals are anyway.  How about a Tablet PC that interfaces with your instrument, your sound boards, your speakers, the internet, other musicians via the internet, so on and so on.  Can you say, “Virtual Band”?  Wow.

This project is a concept propject by a fellow named Nicolas Gonzalez Garrido, who has done some pretty cool concept designs on anything from a washing machine to instant coffee pills, but I have to admit, this SoundGate thing is pretty incredible in thought and design.  Here is his quick description: 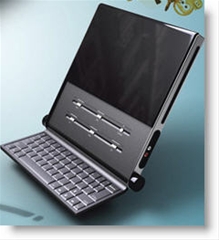 “SoundGate provides musicians with tools for a new rich experience in individual learning, tutor instruction and live playing. The optimal user-experience has been designed taking in account the needs of musicians. The Tablet facilitates the creative process by recording playing sessions, recognizing and transcribing music, prompting sheet music and lyrics, generating electronic accompanist sound and displaying onscreen timing and metronome.”

This is certainly not enough information, so to take your education one step further,you MUST check out this video.

The design sketches are from 2005, but I found several references to current discussion, most notably at GadgetRoad and Bornrich.org, where I found the designer also crediting a few other folks for the project.  He lists the following: Alejandro Sanguinetti, Gustavo Fontana, NicolÃƒÂ¡s GonzÃƒÂ¡lez Garrido, and Esteban Orlandi. 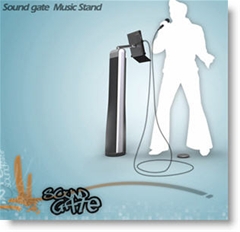 In addition to the Tablet PC, there is a “Music Stand”, which would even include a Helionic projector to display the images of other band members, has a wireless foot pedal and an articulating arm.  The coolness goes on and on.

This is a very well thought out, very possible concept.  Don’t just do a flyby on this story and think it does not apply to you.  There are a number of applications of this type of setup besides just the musician.  How about conference speakers?  Setup a few of these stands in a room and you have a live panel.  Education?  Now all the best professionals do not have to be in one place at one time, they can be in multiple places.  A professor in Middle Eastern Studies who lives in Korea, can now hold classes in any part of the world, and interact with multiple audiences.  This goes far beyond the teleconference or video conference in my mind.

I just think it is a great concept, and one that I hope ends up coming to fruition soon.

Be sure to check out the video!