A recent Apple patent filing for a Spaces-like feature for a tablet device, though it’s unclear if the feature may make it to a future iPad or iOS revision. In fact, by nature of Spaces, the feature may be more suited to a Mac OS X tablet rather than an iOS-powered iPad. 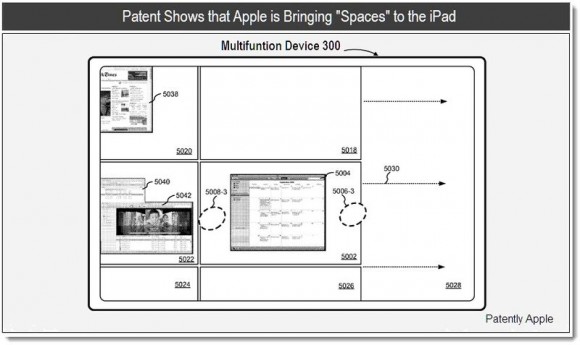 Spaces is a feature on OS X that allows users to create workspaces based on tasks to eliminate clutter and help users focus on specific tasks. For instance, a user may group all webpages into one space and use a separate space to open a Word document to draft a proposal. In another space, a user may group an Excel spreadsheet, some old PDF reports, and an email with some numbers to create a budget while another space may have somw webpages and a Keynote presentation going.

As the Spaces paradigm on Mac OS X involves groups of apps or programs together, it makes use of windows, an element that is missing in iOS as apps are usually blown up full-size to take advantage of the full tablet screen, negating the need for windows. As such, it’s unclear how Apple would implement Spaces on an iPad in its current form sans windows.

As Apple is working on merging the strengths of iOS to OS X on the desktop and the strengths of OS X to iOS on mobile, it will be interesting to see where the two operating systems begin to converge and whether Spaces will eventually see a release on a tablet or iPad.