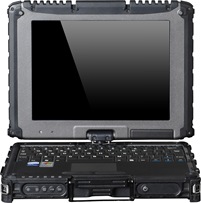 The ever rugged V100 from Getac has been given an Ã¢â‚¬Ëœunder the hood’ reworking to provide better performance while still keeping that bulletproof outer shell.  This update has provided the V100 with a faster processor, higher memory capacity, more storage and expanded wireless options to provide greater connectivity while out in the field.

This unit would make a great addition to any field unit wanting a solid design and a variety of input methods.  The swivel screen and touch panel provide an input option at times when using the integrated keyboard just isn’t an option.  If this unit is anything like the Getac/TabletKiosk unit I reviewed a while back, you’ll be very impressed with the solid feel of the device Ã¢â‚¬” I sure was!!

Read the full press release after the break

““The V100 fully rugged convertible has been very popular because of its advanced feature set and super bright 1200 NITs screen,Ã¢â‚¬Â said Jim Rimay, president, Getac, Inc.  ““With better performance, memory, storage and wireless capabilities, the new Getac V100 is more advanced and flexible as ever and even better suited for mobile field workers and users of rugged notebook PCs.Ã¢â‚¬Â

The new performance enhancing features include a processor upgrade from 1.2 GHz Intel Merom to 1.4 GHz Intel Penryn.  The front side bus has been increased from 533 MHz to 800 MHz; and the 2MB L2 cache has been increased to 3MB.  Memory on the V100’s RAM has increased from 2GB to 4GB.  Storage capacities have been increased from a minimum HDD of 120GB to a minimum of 160GB and a maximum capacity increase from 250GB to 320GB.  In addition, the computer’s wireless networking capabilities have been upgraded to include draft 802.11n and the V100 now offers an ExpressCard slot in the standard configuration.

In addition, the Getac V100 has been UL 1604 certified by Underwriters Laboratories, an independent lab that tests products to ensure public safety.  The optional UL 1604 certification allows safe, spark-free use of the V100 in potentially explosive environments typically found in the oil and gas, petrochemical, aviation and other industries.

The transformable Getac V100 features a swiveling LED screen for the ultimate in portability.  It also features a Magnesium Alloy design, shock mounted hard disk drive and sealed I/O caps and doors to prevent damage from solid particles.  Although it weighs a mere 4.9 pounds, the V100 is rough-and-tumble enough to withstand even the harshest working environments.  It is fully compliant with MIL-STD 810F and IP54 standards for ruggedness including the ability to withstand heavy rain, airborne dust and debris.  For further protection, the convertible notebook/tablet PC has a removable hard drive that is shielded by a special mechanism to prevent damage during operation; anti vibration compounds, which serve as a shock absorber during transport; and an anti-shock housing to further protect it if bumped or dropped.

The V100 also offers its Sunlight Readable Technology and can be upgraded to an industry-leading superÃ¢â‚¬Âbright 1,200 NITs display, which provides unmatched outdoor viewability and screen brightness while decreasing reflectivity thus preserving battery life.  Combined with an active anti-reflective process based on circular polarization to absorb reflective light, the V100’s Sunlight Readable Technology enables viewability that is more than six times better* than competing solutions and creates a mercury-free solution.  Other features include 10/100/1000 Ethernet, integrated GPS and Bluetooth. It also features a waterproof keyboard and an SD card slot.

Getac, Inc., A subsidiary of MiTAC Technology Corporation, was founded in 1989 as a joint venture with GE Aerospace and has been a pioneer and innovator in the rugged mobile computing industry ever since.  Getac provides premier fully rugged, rugged and semi-rugged notebook, tablet PC and handheld solutions for the military, law enforcement, public safety, utility, telecommunication, manufacturing, field service and mobile workforce industries. All Getac rugged models are strictly controlled and monitored from the design, manufacture, quality assurance to service flows, making Getac an industry-preferred rugged computer provider.  For more information, visit www.getac.com.