Just weeks after announcing that it’d add a $399 Xbox One to it’s line up, Microsoft is now trying to entice potential buyers with another Xbox One price cut. Some Xbox 360 users are reporting that the company is offering them a $75 voucher after they upgrade to the Xbox One.

Xbox 360 owners and visitors to community website Neogaf were the first to share reports about the new Xbox One price cut. Many reported seeing a special tile on their Xbox 360’s dashboard thanking them for being a long time Xbox One fan. Opening the message reveals that Microsoft is giving its “best customers” a $75 promotional code when they purchase the $399 or $499 Xbox One.

The purchase doesn’t have to be made at Microsoft’s own retail locations. The ad includes a list of local retailers too, which will certainly make the deal more convenient for those considering upgrading. On the surface, the deal sounds great, but there’s a catch. First, the deal — which only shows up for the Xbox Live user who Microsoft wants to upgrade — isn’t for a rebate or cash back. 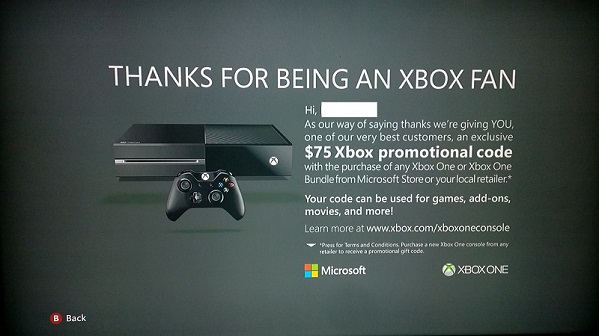 Instead, it’s in the form of an Xbox Store gift card. That means users will be able to purchase downloadable content, games and television shows for their Xbox 360 or Xbox One, but no money or gift cards will actually exchange hands. As such, users can technically get an Xbox One for $324 thanks to this deal, but they’ll still pay someone $399 to get the console itself at least. Of course, the Xbox One doesn’t have an accessories store or anything like that. Buyers taking advantage if this Xbox One price cut can’t redeem that voucher for accessories or physical hardware.

Users should turn on their Xbox 360 and look for a tile with information about a special upgrade discount. Due to its exclusivity not all users are going to have it, of course. Users who get the offer and decide to take advantage of it will need to purchase it sometime before August of this year and activate it as their home console. Microsoft will then send them a message over Xbox Live with a code for $75 they’ll need to redeem before October of this year.

All told, this Xbox One price cut is a great way for Microsoft to get longtime users interested. It might have worked out a bit better if users were receiving a gift card they could use at a retailer, but it’s likely many users would have needed to purchase a game to go along with the console anyway. Presumably, Microsoft is offering the deal to users who have high Gamerscores and participation rates on Xbox Live. Because users with higher gamerscores are more likely to be hardcore gamers, the company likely sees them as the users most likely to defect to Sony’s PS4 gaming console.

Microsoft did something similar before the launch of the Xbox One last year. Back hen it revealed it was giving away Xbox Ones and free games to some of it’s most loyal longtime fans. The giveaway helped generate a lot of goodwill. There was also some negative publicity since Microsoft apparently chose users from a pre-selected pool at random to give consoles to. That meant that not all hard core users got one.

Unfortunately, this is likely to be the only real deal users see on the Xbox One in the coming months. A few weeks before it’s E3 2014 briefing Microsoft announced there would be an Xbox One price cut in the form of a bundle that doesn’t include the Kinect 2 sensor. The console lacks a lot of the features that make the Xbox One so different from other consoles, but it costs just $399. That’s $100 lower than the single Xbox One bundle that Microsoft launched last year.