While Samsung is launching its ATIV S Windows Phone 8 handset internationally as a premium contender with Galaxy S3-like specs, leaked specs for the Verizon-bound ATIV Odyssey indicate that the smartphone would be more of a mid-range contender with specs akin to Verizon’s Nokia Lumia 822. In fact, the ATIV Odyssey appears to be more like last generation’s Samsung Android flagship in the shape of the Galaxy S2 rather than the current Galaxy S3.

The ATIV Odyssey was supposed to have been released and available on Verizon’s 4G LTE network in 2012, but Samsung and the U.S. carrier had missed the launch date. The device may get a more formal announcement with complete specs at the Consumer Electronics Show next week in Las Vegas.

According to a leaked posting on WP Central, the phone will feature a 4-inch WVGA Super AMOLED panel, which isn’t as high resolution as the HTC 8X, which has a 720p HD panel, on Verizon. The screen size is also smaller than the Verizon 4.3-inch WVGA AMOLED panel on the Nokia Lumia 822. 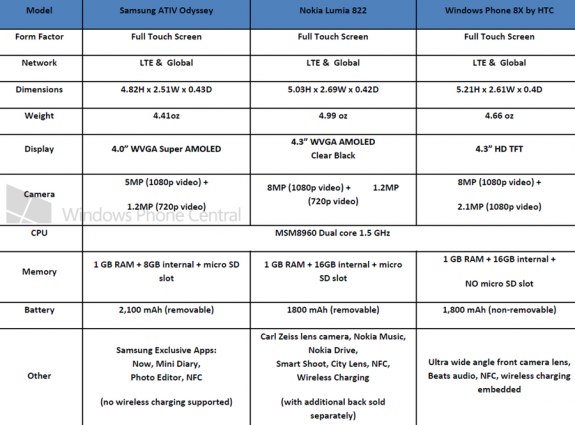 Other specs include a 5-megapixel rear camera that could record 1080p HD video, a front-facing camera, 1 GB RAM, dual-core 1.5 GHz processor, 8 GB internal storage, micro SD card slot for expansion, and a number of Samsung exclusive apps that will be preloaded on the phone.

These Samsung apps will help Samsung keep a consistent user experience between its Android and Windows Phone range of devices with apps such as Now, Mini Diary, and a Photo Editor. There will be no wireless charging supported, although NFC will be present.

So far, we do not know when the phone would be released or what pricing will be with a contract. The device will likely support 4G LTE on Verizon’s network, along with global GSM/HSPA+ roaming capabilities to make it a world phone.

The phone will be the lightest Windows Phone 8 device thus far on Verizon’s network, clocking in at 4.41 ounces, which is lighter than the 4.66-ounch HTC 8X.