Smartphones like the Samsung Galaxy S6 and Galaxy S6 Edge, LG G4, HTC One M9 and others are all extremely fast and powerful handheld computers. With efficient six or 8-core processors and 3GB of RAM they have more than enough power. That said, those who want even better performance and faster devices, the steps below will deliver exactly that.

There are plenty of different ways to change our smartphones and improve performance. From using different home launchers like the Google Now Launcher, to rooting (like Jailbreaking for Android) and flashing custom software and more. However, some of those things are extremely technical that the average user can’t do or doesn’t dare mess with. Instead, try these thee easy steps to make your Android phone or tablet faster.

Read: How to Make Your Android Faster in 3 Easy Steps

For the beginner looking for a simple way to speed up the Galaxy S6 or LG G4 phone in seconds, with no knowledge of Android or custom apps or hacks required, below is a quick video and screenshots on how to make your device faster, and what the three settings you change actually do.

Whether you have the latest Samsung Galaxy S6 with a powerful 8-core processor, to a budget friendly low-end device that was free from your carrier, this trick will speed up any and all Android smartphones and tablets.

We focused on the three latest flagship phones in our title, but this trick can work for everyone. We will be changing a few simple setting to control the animations and transitions, which will make the phone faster, and potentially improve battery life at the same time. It’s a little trick everyone should know, and is worth sharing with friends and family.

All those effects and animations while opening apps, flipping between homescreens, or while tapping through different settings in the settings menu. Even the animation effect you see when you open and close the application tray. They all look neat, but are nothing more than eye candy. All we’ll be doing here today is turning down some of those animations and effects to make everything on any Android smartphone or tablet be faster, not prettier.

The first step is gaining access to a hidden developer menu in settings on your Galaxy S6, LG G4, or other devices. This is just a few taps away, and extremely simple. The video explains how, or just check out the link below.

All you need to do is head into settings > about phone (or tablet) > and tap seven (7) times on the “build number” portion of the about phone screen. This will enable the hidden developer menu, and now you can easily speed up your Android with the steps from the video or screenshots.

Once you’ve enabled the developer options menu on your Android phone or tablet you’ll need to head into developer options and change three settings. To make things simple, we’ll go through all the steps once more with screenshots.

Settings > Developer Options > Scroll down to Windows Animation Scale, Transitions Animation Scale, and Animator Duration Scale. These are all set to 1x. Turning these values UP you’ll see animations and screen transitions get extremely slow. You can try it just for fun, but we’re actually turning them down, or off completely. 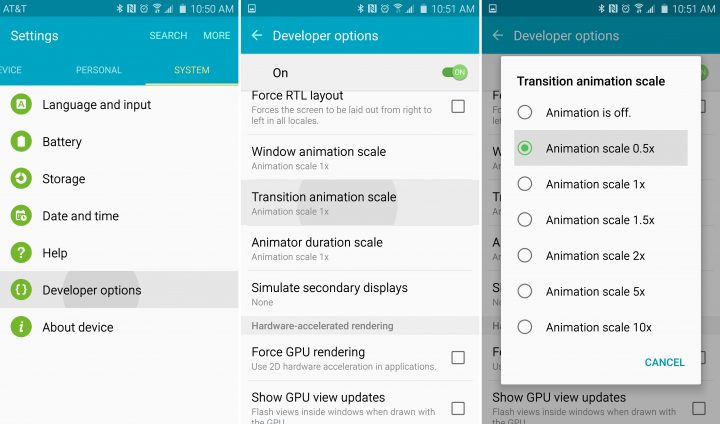 Change all three of the animation settings mentioned above from 1x down to .5x. This will cut the animations and transition effects in half, and make your phone look like it’s nearly twice as fast. Everything opens quick. From apps, the settings menu, application tray, and everything else. Transitions and animations have all been doubled.

Some users may opt to disable them completely and set it to off, but keeping it at .5x still leaves Android looking pretty, while being faster than ever before.

It’s a good idea to restart your device after changing these settings to make sure it is applied throughout the system. Again, this can be done on any Android smartphone or tablet, not just the few devices we mentioned in the title. Give it a try today and drop a comment below if you see a noticeable increase in performance.