If there’s one problem with the iPad 2’s design it’s that iPad users generally have poor posture , especially when not using a stand or a case with an integrated stand. The spiderArm aims to fix that issue by attaching the iPad 2 to a modular arm that can attach to almost any surface.

The spiderArm is an iPad case that attaches to a modular arm that then attaches to a table, furniture, or even a wall if needed. With the device you’re able to move the iPad 2 into any position. The idea is that with the spiderArm you can use your iPad 2 on the couch, in bed, in the kitchen, or in the office without having to find a surface to put it on or hold it in an awkward position. 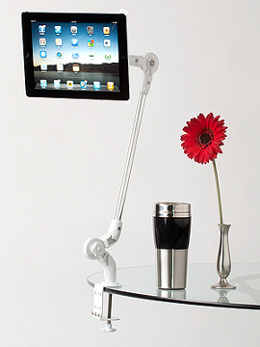 The spiderArm has two separate attachments: the SurfaceMount for tables or desks and the VersaMount for wall mounts. There are three arms for the device that let you control just how far away from the mount the iPad can move. Those three arms are extendable and have have joints with 270 degrees of rotation. Of course the SecureSnap case can be removed from the arms should you want to move around freely with your iPad 2.

With a price of $79.99 the spiderArm is a bit pricey compared to standard cases, but the price could be worth it if your iPad is literally giving you a pain in the neck. There are many other iPad cases out there, many of which have built-in stands that provide a much more portable ergonomic solution.

(Read: Everything you Need to Know About iPad Ergonomics)