Let’s say you are a world-class film maker and you are about to meet the leader of the free world. You might want to catch the moment on video for your own personal memories and even to share with fans of your work. At the very least you will want to get a high quality snapshot to keep for your grandkids so you can tell them about the time you met the President, whether you voted for him or her or not. Problem is you don’t have one of those great movie cameras or even a pocket video camera like the soon to be extinct Flip Ultra HD. So you whip out the best camera you have available – your iPad 2! 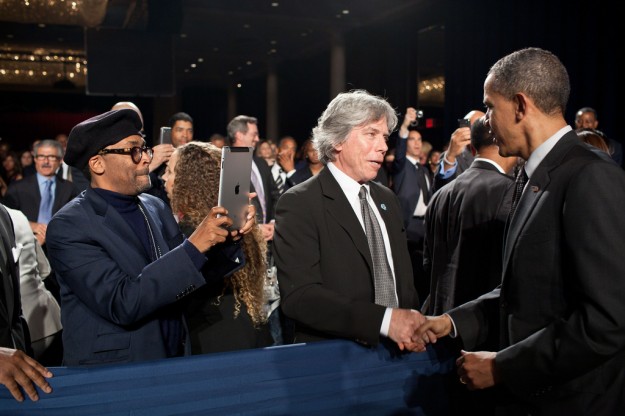 Spike Lee did just that recently when he was on the “rope line” after the National Action Network’s Keepers of the Dream awards gala in New York earlier this month. The official White House photographer of course had a much higher quality camera as he took the picture above. It’s not the first time the iPad 2 has been used for shooting a significant event. A recent red carpet premiere of The Kennedys mini-series was shot with an iPad 2.

Regardless of your political leanings, it would behoove you to carry a decent camera to an event where you are going to meet the President. Sadly, the camera in the iPad 2 is less than star quality. It’s not horrible when shooting video, but still images are often grainy and not that sharp. We sure wish Apple had included something as good as the iPhone 4 camera in the iPad 2, but then we wouldn’t have a good reason to upgrade to iPad 3 next Spring.

When you take a very close look at the photo above three others are taking quick snaps of President Obama. Two of them are certainly using their cell phones and the third looks like a point-and-shoot or maybe at best a high-end point-and-shoot. For the majority of people, a dedicated camera is becoming a thing of the past. It is likely that Cisco was right to ditch the Flip, despite my disappointment.