It appears that Spotify might be gearing up to release an iPad version of its mobile software as a photo of what purportedly is the upcoming app has leaked out.

The photo, leaked by Swedish technology consultant Statigram, courtesy of 9to5Mac, depicts what appears to be a Spotify for iPad application in the wild. The image appeared on Instagram and it included a caption that stated that the application is getting closer.

This leak comes shortly after Spotify announced an event in New York City set for April 18th. It’s possible that the event will include an announcement regarding the new iPad application. 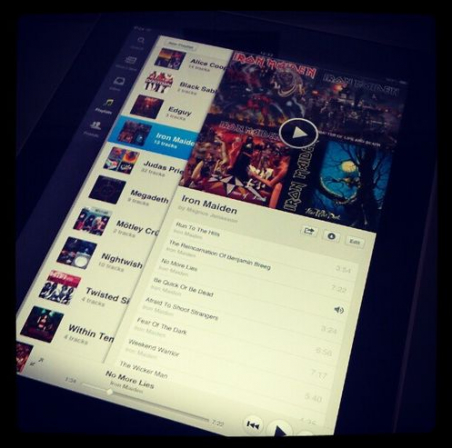 From the image, we can see a user interface that looks very much like the official Twitter iOS application with the side bar on the left that houses features like What’s New, Inbox, Playlists, and Friends.

Once selected, those features show up in the main part of the UI which resides on the right hand side.

There also appear to be controls for music on the bottom of the application.

Overall, it appears to be much more polished then the Android version of the application which is in desperate need of an update.

Spotify has been rumored to be releasing a major upgrade for Android in the weeks ahead, an update that the company likely hopes will halt the complaints from premium users of the service.

Right now, it’s unclear when that update will be rolling out but it’s certainly possible that the company will announce the update alongside the iPad application at the event next week.