Ford and Spotify demonstrated exactly how what I’d like to have in my car at the TechCrunch Hackathon. Using Ford’s SYNC API, Spotify was able to integrate its iOS app into a Ford’s SYNC demo unit.

Spotify is a music service that streams music on demand. Like competitors Pandora and Slacker, you can search by artist, genre and song title. But the reason many people are switching to Spotify is that users can actually play the tracks and artists they’re interested in rather than having to settle for music that’s similar to what they’re looking for and waiting around for their favorite tunes. 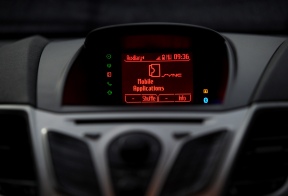 Ford’s SYNC system and MyTouch head unit are much more than an entertainment system. Ford’s inviting developers to experiment with an API that allows app developers to take apps from smartphones and make them usable while driving. That might not sound like the safest thing in the world, but users are able to command the apps with their voices instead of glancing down to tap and swipe.

Here’s the demo from the TechCrunch Hackathon.

There are a number of auto manufacturers marketing gadgetry to move units, but Ford seems is the most determined to meld cars and mobile devices. Auto manufactures have to plan at least five years out, which is decades in mobile phone years. Opening up to third-party developers is a smart move as it will help keep entertainment systems from becoming obsolete before the cars they’re in roll off dealers’ lots.