In late October, Sprint promised new 4G LTE markets in the months ahead. One of those markets was Joplin, Missouri and it looks like service has gone live there for some people in that city today as we’ve heard that Sprint’s 4G LTE network is now active.

Joplin, Missouri was one of the cities that Sprint mentioned was in line for an upgrade to 4G LTE data speeds and it looks like, at least for the moment, users have access to the network.

A Sprint user in Joplin, Missouri has informed Gotta Be Mobile that his 4G LTE supported device is now able to connect to Sprint’s 4G LTE network and pull down extremely fast data speeds because of it. As seen in the photo below, the device is pulling down data speeds that far exceed those that can be found on a standard 3G network. 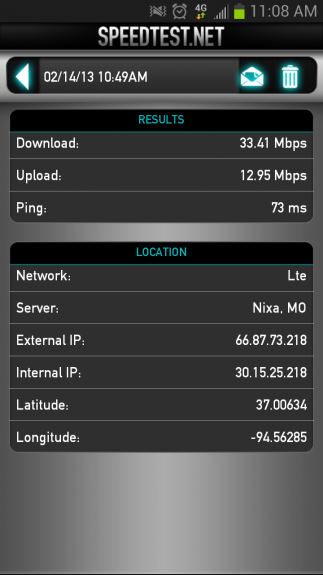 Sprint’s 4G LTE network is live, at least for the time being, in Joplin, Missouri.

Of course, those speeds are likely not going to be the speeds that users consistently see as the network will, over time, become more congested and will thus, slow down. Right now, the network is likely extremely vacant so those in Joplin and elsewhere should not expect these types of speeds to be typical in daily use.

Sprint tells is that it hasn’t launched the network in Joplin quite yet and that it’s regularly testing the network which is why it has popped up today. So while it may not stick, it does bode well for an upcoming launch though and we’ve heard that March is a target month for many of Sprint’s 4G LTE markets. 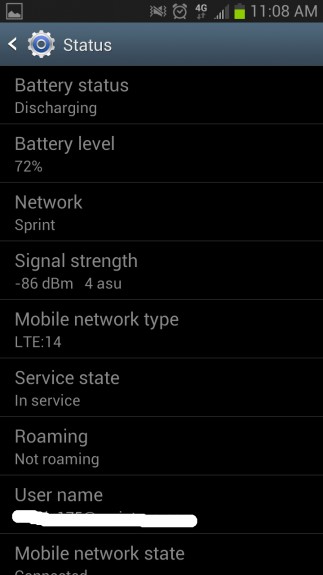 Sprint will be expanding its 4G LTE network in 2013.

Joplin was one several cities that was earmarked as a future Sprint 4G LTE market. Recently, Sprint added to that list announcing 28 new markets that should be getting LTE data speeds in the days ahead.

The carrier looks set to announce its first high-end LTE smartphone of 2013 in the form of the HTC One, rumored for a February 19th launch, and a March 22nd release date on Sprint’s 4G LTE network.

And while we can’t be certain, it looks like those in Joplin, Missouri, and perhaps other previously announced markets, will be able to indulge in that launch.