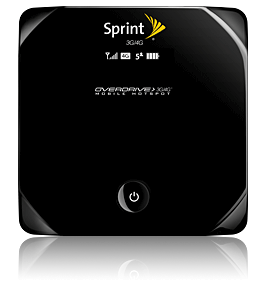 For the past several months we’ve been inundated with Sprint ads for the EVO 4G and other smartphones, despite the fact that the wireless company hasn’t oficially launched WiMax in the San Francisco Bay Area…until today. But unless you’re a San Francisco Bay Area geek you probably haven’t heard the good news.

I’ve been using Sprint’s mobile broadband service so I can work on the go for almost five years, dutifully paying $64.58 every month for the service. I’ve used the service while running around Silicon Valley, while on vacation in Hawaii, between innings at AT&T Park and in countless airport terminals. What really kicked my Sprint usage into high gear was the introduction of the Novatel MiFi, which I bought almost two years ago. Here’s a look at how I used the Sprint MiFi around my neighborhood. 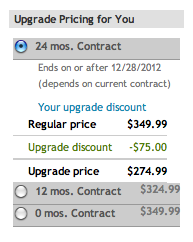 Those of us toting Sprint MiFis around San Francisco are prime targets for the Sierra Wireless Overdrive. But the Overdrive has arrived in San Francisco with barely a peep. I wanted to pick up an Overdrive today and see how WiMax performed in the Bay Area before heading out to Las Vegas for CES 2011. Sprint is advertising a $49.99 web special on the Overdrive, which is a very attractive price. Unfortunately, according to Sprint.cm I’m not eligible for a full upgrade until April 1, 2011, which means I’d have to pay $274.99, after a $75 subsidy. Since the MiFi was announced at CES 2009 and released months later, anyone with a two year contract is in the same boat as me.

I called Sprint and was told by a salesperson, who may have been in the Philippines, that I actually did qualify for the $49.99 price since I was a loyal customer. I thought that was great and told him to send me an Overdrive. But when he started to process the order he told me that I’d have to pay $275.  I asked him what the early termination fee (ETF) would be on my account.

I guess ETF was the magic word and I was transferred to an account retention specialist based in the U.S. I politely told him that I was a loyal Sprint customer, but would be exploring other 4G options if I was going to have to pay more than five times what a new Sprint mobile broadband user had to pay. He explained that the pro-rated ETF on my MiFi would be $50.  Before I could say another word he mentioned that I may be eligible to “buy out” the remainder of my contract in order to reset my eligibility to today without having to cancel and sign up for a new line. 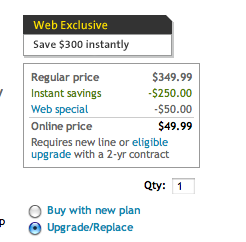 After a brief hold he came back and said that I could indeed “buy out” the remaining four months of my contract for $45. I agreed to these terms and according to the rep this will enable me to waltz into any Sprint store or authorized retailer tomorrow afternoon and buy an Overdrive for the same price as a new customer. I can also take advantage of that $49.99 offer I spotted at Sprint.com to begin with.

I don’t expect Sprint to offer me more subsidies than I ‘deserve,’ but it really needs to make it easier for loyal customers to move up from 3G to 4G modems. Its spent billions of dollars to bring 4G to market and the carrier is now suffering from a ‘last mile’ problem. The last mile in this case is the all-important step of actually getting customers to buy the service.

Sprint can solve this problem by simply training its salespeople to offer the $50 or so buyout as soon as they express intrest in upgrading or being upfront about prorated ETFs. It wasn’t that long ago that carriers used to charge full ETFs even if customers were just days from the end of their contracts.

The current scheme Sprint has going for existing customers is a real turn off. While I was on hold and talking to Sprint’s salespeople, I was browsing the competitions’ offers. Verizon’s LTE service has received rave reviews and Clear is virtually identical to Sprint in most ways, except there are some attractive bundles available.

We’ve been waiting for WiMax for ages here in the heart of geek land. The least Sprint could do us roll out the welcome mat and make it easier for early adopters to jump on board.