In addition to the recently announced mid-range HTC 8XT Windows Phone 8 smartphone with BoomSound audio, Sprint Nextel also announced a second Windows Phone device from Samsung in the form of the ATIV S Neo. The ATIV S Neo will be the higher end device of the two Windows Phone on the network, and features high-end specs and a number of Samsung-specific software customization that will make the phone stand out.

Unlike the ATIV Odyssey on Verizon Wireless, the ATIV S Neo will take on the more flagship specs that debuted on the global version of the device known as the ATIV S. Specs for the phone include a 4.8-inch HD display, 1 GB RAM, 1.4 GHz dual-core processor with memory card slot, global roaming capabilities, NFC, and an 8-negapixel rear camera with a 1.9-megapixel front-facing camera.

Some of the specs for this phone are reminiscent of the Galaxy S3 Android smartphone. 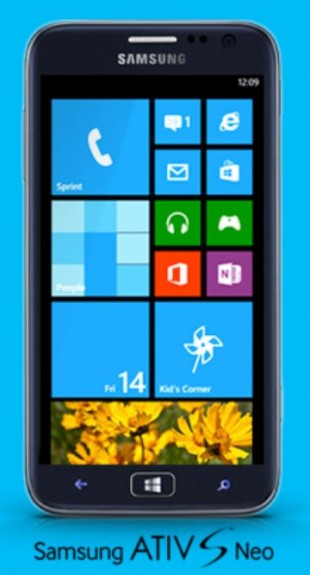 Along with the Samsung Now app, which gives a quick glance at news, weather, and other relevant information at a glance, Samsung is also bundling an enhanced camera app with built-in photo editing software.

It will include a variety of camera apps preloaded, including the Beauty Shot mode for smoother looking skin in headshots, Manga Camera to give pictures a fun twist by turning friends and family into cartoons, and built-in Photo Editor that allows the user to edit, color, effect, decorate or share their pictures quickly and easily.

Some of these camera apps had debuted on Samsung’s Android-based devices, including the Galaxy S flagship smartphone and the Galaxy Camera series.

Sprint and Samsung are not giving any information at this time on availability and pricing. The exact specs and pricing details will be shared at a later date, according to both companies.