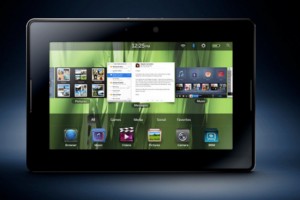 Sprint has yet to launch its 4G WiMax edition of Research in Motion’s BlackBerry PlayBook tablet, but the carrier has now announced that it will start selling the 16 GB WiFi edition through its channels, including its corporate-owned retail stores.

The 16 GB WiFi edition of the PlayBook tablet will retail for $499.99. The device features a gorgeous 7-inch 1024 X 600 display, dual-core gigahertz processor, HD front- and rear-facing cameras, and the power to multitask with the QNX operating system that’s powering the BlackBerry Tablet OS.

Users of the WiFi PlayBook still need to rely on the BlackBerry Bridge connection to their BlackBerry smartphone to get basic apps like Calendar and Email on their phones.

BlackBerry PlayBook with Wi-Fi Available from Sprint on June 5

The much anticipated BlackBerry® PlayBook™ tablet with Wi-Fi® connectivity and 16 GB of storage will go on sale in all Sprint direct ship sales channels, including Sprint Stores, Business Sales, www.sprint.com and Telesales (1-800-SPRINT1) on Sunday, June 5, for $499.99 (plus tax).

BlackBerry Bridge is available as a free download on BlackBerry App World™ and will be supported on BlackBerry smartphone data plans from Sprint for no additional charge.

The BlackBerry and RIM families of related marks, images and symbols are the exclusive properties and trademarks of Research In Motion Limited.