If you haven’t yet scooped up a Motorola Photon 4G, HTC EVO 3D or aren’t one of the many waiting for the WiMax flavored Samsung Galaxy S II, you’ll be happy to know that RIM will be throwing the BlackBerry Monza/Monoco aka BlackBerry Torch 9850 into the mix at some point as well and today, we’ve got our first good look at Sprint’s BlackBerry Torch 9850 courtesy of a render outed by Pocketnow. 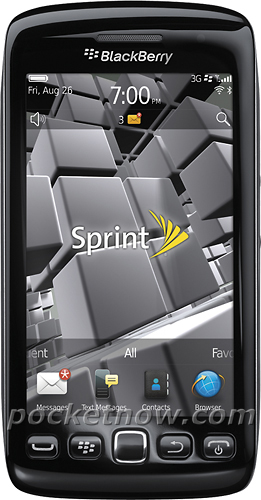 What you see here is a render of the CDMA version of the Torch that will be coming with a 3.7-inch display, 1.2GHz processor, NFC support, and RIM’s latest software, BlackBerry OS 7. We’ve already seen it in the wild next to the still unreleased BlackBerry Bold 9900 but the render supplies us with a nice little closeup of one of the devices that will surely be out at some point this year.

The device has had a rumored release date of August 21st which is right around the time the Samsung Galaxy S II for Sprint might be out. That date could also be the day that Sprint releases the BlackBerry Bold 9930 as well.

So, that’s that. The Torch 9850 looks like a fairly capable phone but it’s going to need a few tricks up its sleeve when it arrives or its going to have an extremely tough time competing.