It looks like Sprint’s policy crackdown prior to the expected launch of the iPhone will not be limited to a dead Sprint Premier program, a tightened return policy and an increase in ETF fees.

According to a document obtained by SprintFeed, it looks like Sprint is going to be placing a cap on mobile hotspot plans starting October 2nd, just two days before the iPhone is expected to be announced.

Sprint is going to be placing a 5GB cap on its 3g/4G mobile hotspot plans. It won’t apply to tablets or to your phone’s normal data plan but if you like to tether, you’re definitely going to feel the bite. 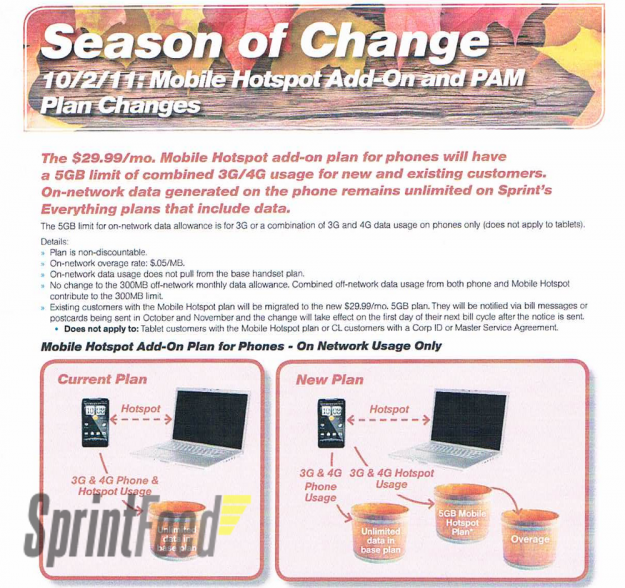 It also appears that those that go over the threshold will be charged five cents for every MB over the 5GB limit. This policy looks like it’s going to apply to everyone so there will be no grandfathering to be had here.

So, those of you that tether, you’ll want to take advantage of your freedom while you can as it appears that you have just over a week until Sprint drops the hammer down on your parade. If there is any solace, keep in mind the point of these policy changes is likely to keep Sprint profitable enough to hold onto unlimited data plans once the iPhone arrives. It’s still hard to swallow though.

Sprint has also yet to make this official so there is still a glimmer of hope but we’re not optimistic.