The Oprah Show is coming to a close after 25 years and Sprint is offering a way for Oprah Winfrey fans to say goodbye. The wireless carrier’s put together a group ‘card’ that lets Oprah fans upload a photo and add a message. The card will presumably be forward to Oprah herself at some point.

While the end of the show is a big deal to a lot of Oprah Winfrey fans. But if you’re like me, the end of the popular daytime TV show won’t have the slightest impact on my life. 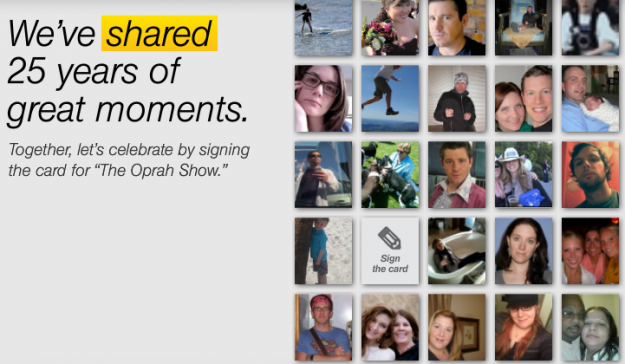 You can see the card for Oprah and add your picture to it at this Sprint.com landing page.

So why am I mentioning it here on GottaBeMobile? Because I find it interesting to watch the lengths carriers will go to attract new customers or keep the ones they already have.

In the United States we have four major wireless carriers, two of which are in the middle of getting hitched. In a country with so few wireless options, each of the carriers have to try and be all things to all people. Sprint, Verizon, AT&T and T-Mobile have to take a shotgun approach to marketing.

Sprint can’t just go after the Android geeks or early adopters. Sprint needs to appeal to the millions of women that grew up watching The Oprah Show with their moms and have raised their kids with at least some input from Oprah and guests. Sprint needs to make the most of it flagship NASCAR sponsorship by pumping out ads and apps that appeal to the throngs of gear-heads that would rather watch colorful cars drive in circles for 500 miles than watch Oprah hug a celebrity.

Sprint’s run ads that appeal to parents like me, but it also needs to appeal to ‘pet parents’ by running 4G ads that encourage posting pictures and videos online.

While geeks might scoff at the Oprah, cat and NASCAR promos, the truth of the matter is that the average American can relate to this kind of marketing a heck of a lot more easily than the countless jargon-filled technology ads that are currently running.

https://www.youtube.com/watch?v=R18SPF1fCik
Verizon is currently running a TV ad called ‘The Showdown’ that I find interesting. It’s filled with a bunch of terms that most people understand and the buzz words zoom right by a dumbfounded mom. Geeks already know that the Galaxy Tab and Xoom can run Flash and that the former tablet is 4G LTE upgradeable, so I’m not sure how much they will get out of this commercial. Moms that may be interested in getting a tablet are simply having their fears confirmed that shopping for a tablet can be complex.

Am I signing the goodbye card to Oprah or rushing out to buy a new phone from Sprint because of its current marketing activities? No, but it’s nice to see that the wireless carrier is covering all its bases. It’s also a nice reminder of why Sprint and other carriers can’t simply trumpet the latest technology for geeks’ sake. The average consumer worries about buying a phone once every two years or so. There are millions of people out there that are shedding tears over a show they’ve watched virtually every day for two and a half decades.