Sprint One Up, the program that allowed users to upgrade devices yearly by what amounted to paying Sprint more per month, has officially been discontinued.

Though Sprint has yet to announce the cancellation of the program publicly, the company’s already updated its online FAQ section, saying “Sprint One Up was a program that retired on 1/9/14.”

Sprint One Up allowed users to upgrade their device once every year, or after they’d successfully paid the company’s $15 One Up fee twelve times. Like rival programs from T-Mobile and AT&T, Sprint One Up also required users to turn in their old smartphone when upgrading to a new device using One Up. 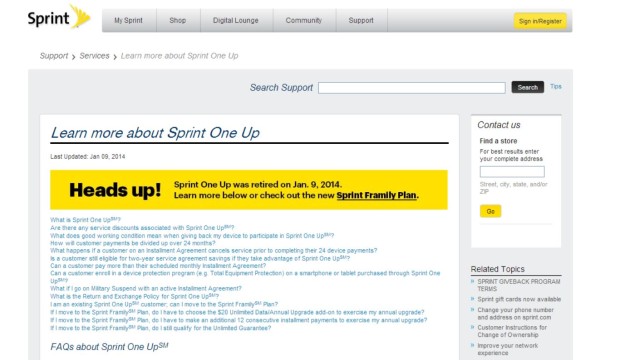 Sprint has discontinued its One Up upgrade program.

Sprint only began offering the One Up program this past September. The move followed T-Mobile’s introduction of its own Jump program. Jump allows T-Mobile users to upgrade devices twice a year, provided they pay the service’s $10 add-on cost and purchased a device using the company’s in-house financing service. Jump also includes a warranty service for replacing damaged devices.

Instead of promoting a decent alternative to the One Up program, Sprint is actually using this opportunity to talk up the Framily plans it introduced last week.

The plan encourages Sprint users and new customers to team up with friends and family to purchase Sprint service together. Unlike the service’s other family plan, Framily plan members aren’t all responsible for one collective bill. This means that all devices on a Framily plan aren’t deactivated for one user failing to pay their portion of the bill. Framily plans start at $55 per month for each user. That price grants users 1GB of data, unlimited talk time and unlimited text messaging. Sprint knocks off $5 in service charges for every user who joins a Framily plan for up to a $30 discount.

Read: Sprint Framily Plan Encourages You to Befriend Strangers to Save Money

Although the idea is certainly innovative, it’s not exactly a replacement for yearly upgrades. Perhaps Sprint is hoping that Framily plans will help it stand out from the sea of American carriers all trying to copy T-Mobile’s moves in the wireless service space. Sprint’s decision to cancel One Up on January 9th, one day before it began offering Framily plans seems to follow that logic.

Sprint is discounting former One Up user’s services by $15. It’ll suspend that discount the moment users switch service plans or upgrade to a new device.