We just got a demo unit of the Epic 4G Touch, Sprint’s Galaxy S II variant that supports the Now Network’s 4G WiMax protocol for high speed mobile broadband access. The svelte handset is equally slim as it is light, but delivers fast performance thanks to a dual-core 1.2 GHz Exynos processor made by Samsung. Moreover, as this is a Sprint ID device, it means that users who aren’t fond of Samsung’s proprietary TouchWiz skin can go ahead and revert to a more native feel of stock Android. 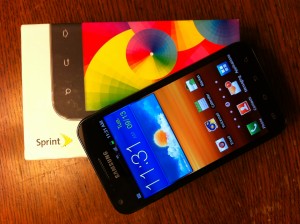 We’ll have a full review in shortly–it’s a busy tech week this week with multiple conventions and conferences occurring simultaneously–so bear with us as I provide my first impressions of the device.

Your Choice: TouchWiz UI or Near Stock Android Performance with Sprint ID

Sprint ID relies on a mostly–though with slight modifications–native build of the Android operating system, in this case Android 2.3.4. Users can download additional ‘Sprint ID’ packs where they’re able to get pre-bundled apps, wallpapers, ringtones, widgets, and more depending on their lifestyle, and Sprint has a number of apps ranging from health to eco-friendly to fitness. 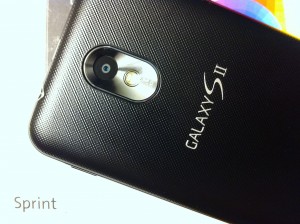 In terms of hardware, if you’re moving from the original Epic 4G, or any of Sprint’s other 4G phones, you’ll definitely miss the lack of a hardware camera button on the Epic 4G Touch. This is a big shame as the Epic 4G Touch, like its Galaxy S II cousins, sports a great camera and there is no quick hardware launcher for the camera. Instead, you’ll have to launch the camera via the touchscreen by tapping on the camera app icon.

On first impression, I am more fond of the Epic 4G Touch’s WVGA Super AMOLED Plus display than I am of rival Verizon’s flagship Droid Bionic’s higher resolution qHD LCD touchscreen. While the Super AMOLED Plus display, stretched to 4.52 inches diagonally, is lower resolution than the qHD display spread over 4.3 inches on the Droid Bionic, the Bionic’s utilization of a PenTile-based subpixel display makes things appear more grainy than a 960 X 540 display should appear. Theoretically, the qHD display provides a pixel resolution similar to Apple’s 960 X 640 Retina Display on the 3.5-inch iPhone, but is distributed over a larger screen and utilizes a more narrow 16:9 aspect ratio so it loses 100 pixels on the width. However, the iPhone’s non-PenTile screen is sharp while the Droid Bionic appears grainy.

On the other hand, the lower 800 X 480 WVGA panel on the Galaxy S II–in this case, the Epic 4G Touch–looks sharp. As with Super AMOLED Plus and AMOLED-based displays, you’ll have a lot of contrast with deep blacks, vibrant colors, and great viewing angles. The display is brighter than last generation’s Super AMOLED display on the keyboarded Epic 4G on Sprint’s network, and is great even under direct sunlight. Moreover, I didn’t experience the graininess that was apparent on the PenTile-based qHD LCD of rival smartphones.

In the brief time I’ve had the device, I’ve also noticed that the Exynos processor seems a bit more zippy than the Droid Bionic’s Texas Instruments dual-core CPU. Apps opened a bit faster, flipping between screens was more fluid, and launching apps with no delays was a joy. Though Motorola had tweaked its implementation of Android on the Droid Bionic over the Droid 3 to resolve some of the sluggishness, Samsung’s in-house Exynos chipset seems to deliver a bit more power.

Moreover, considering that there are similarities between the Sprint Epic 4G Touch and the Droid Charge on Verizon–both units are 4G handsets that sport the same vivid Super AMOLED Plus display–I didn’t find the constant re-drawing of the app library that I had pointed out in my Droid Charge review. On the Charge, after loading the handset up between the typical 7-9 pages of apps (this number includes the default apps that ships with the phone), I noticed that opening the app drawer caused the system to have to re-draw and re-populate the app menu with all the apps. This process can take a few minutes and is frustrating when it occurs constantly whenever you’re trying to quickly launch an app. This appears to be gone on the Epic 4G Touch. 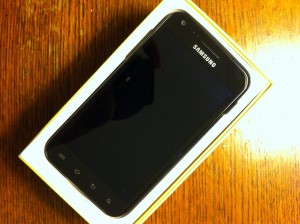 And finally, just a quick thought for hardware purists–those who were concerned that Sprint would mar the front fascia of the phone with un-necessary carrier need not fret. The front is clean minus the Samsung logo at the top and the four capacitive Android navigation buttons at the bottom. The screen occupies much of the front surface of the phone and the Sprint branding is located on the rear of the device towards the bottom portion of the battery cover. Near the center of the battery cover on the rear is the Galaxy S II branding–the device doesn’t show the carrier’s Epic 4G Touch branding on the hardware.

We’ll provide a full review in the coming days, but for now, these are some of my first impressions with Samsung’s Galaxy S II Epic 4G Touch on the Now Network. Stay tuned.