No, the title is not a mistake. It appears that Samsung may very well be working on a new, higher-end Galaxy Nexus that could feature an upgraded processor and GPU. The source of this speculation comes from a NenaMark benchmark that has a Galaxy Nexus sporting a PowerVR SGX 544 GPU, the same GPU found in Texas Instruments OMAP 4470 processor.

So, if the benchmark wasn’t faked – and it’s entirely possible that it was, we may end up with an upgraded Galaxy Nexus in the future.

One theory that we should put out there is that this could be Sprint’s Galaxy Nexus which appeared on the carrier’s website over the weekend in the form of a sign-up page. We know very little about Sprint’s version of the Galaxy Nexus other than the supposed 1.5GHz processor that’s on board. Other than that, it remains a complete and utter mystery. 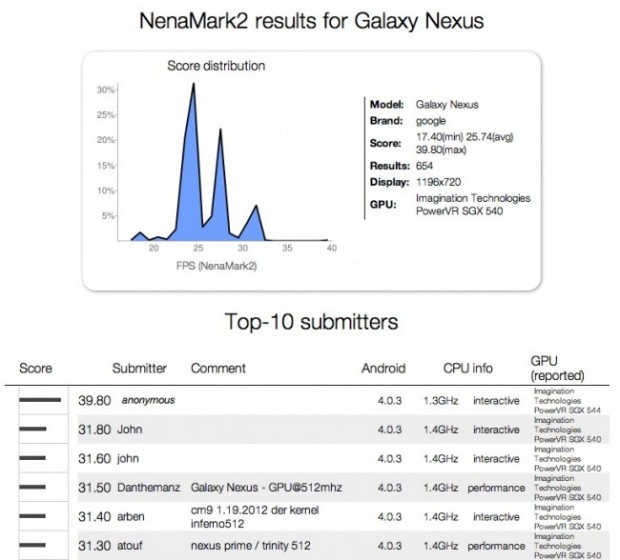 This benchmark might be our first glimpse at the device’s internals and if that’s the case, consider us impressed.

Before we get too excited though, we should point out that Sprint Galaxy Nexus isn’t expected to launch until later this year. That’s because it’s a 4G LTE device without a home.

Currently, Sprint only has a 4G WiMax network in place. The carrier plans to get its 4G LTE network up at some point during the middle of 2012 and at that point, we assume that the Galaxy Nexus will launch.

It’s also entirely possible that this benchmark is for another Galaxy Nexus.

However, we just don’t see Samsung doing this to those that already bought the Nexus.

We can’t even imagine the backlash.