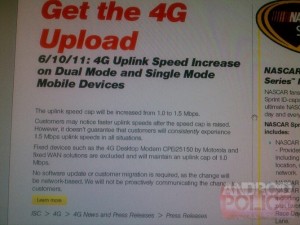 Users of Sprint’s 4G smartphones will benefit from increased upload speeds as the carrier prepares for the launch of the flagship HTC EVO 3D smartphone. While most users will probably not notice the upload speed increase, which is jumping from 1.0 Mbps to 1.5 Mbps, as consumers mostly consume content on their phones, which is affected by download speeds, those who upload and share photos and videos to the web should be pleased to know that the faster speeds means the upload times will drop.

The speed jump will happen beginning on June 10th.