Sprint 'One Ups' The Competition With Leaked Early Upgrade Program

As the last of the four major U.S. carriers to roll out an early upgrade program, Sprint’s leaked ‘One Up’ plan shows that the carrier is looking to offer subscriber the option to upgrade their phones annually by trading in old devices while at the same time saving on their monthly plans. The program follows the lead of T-Mobile’s UN-carrier initiative with JUMP, AT&T’s Next, and Verizon’s Edge.

Under the ‘One Up’ program, customers would have to pay monthly installments for the full price of the device over two years. Customers would have to pay off the cost of their device if they choose to leave Sprint early. The base iPhone 5s, which costs $650, will cost around $27 per month. After a year, Sprint customers on the One Up plan could trade in their current device and upgrade to a new device–an iPhone 6–and restart the process. 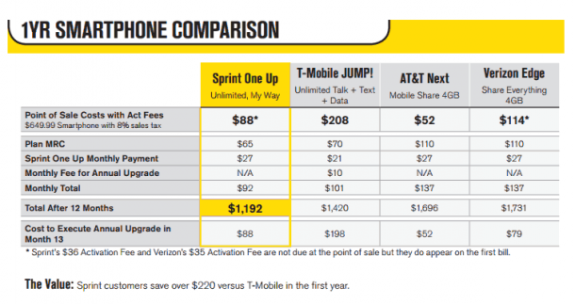 But One Up also offers savings to a customer’s monthly service bill similar to T-Mobile’s Jump. In essence, by not signing a two-year contract and by not taking a subsidy for the device itself, Sprint is offering its customers a discount on the monthly plan if a leaked chart obtained by CNET is accurate.

READ: How to Save Money on iPhone 5s and Upgrade Early

This is in contrast to AT&T and Verizon where the respective Next and Edge plans don’t offer any savings incentive on the monthly phone service. On those plans, you’re not taking any device subsidies and you’d still be paying full price on the monthly service.

According to CNET, customers currently still within their contract may still be eligible to participate in the new One Up plan provided they trade in their existing devices:

It’s unclear if these plans will be a hit with Sprint’s customers. The good news is that although Sprint is experimenting with new plans, it’s still retaining its famed unlimited voice, data, and text plans.