The iPhone 4S has been out for just over a week, but it is already selling like hotcakes on all three carriers. Sprint achieved a one day sales record when the iPhone 4S launched, but shortly after the iPhone 4S made it into the hands of customers, there was some complaining about data speeds.

Sprint customers took to the Sprint forums to complain about slow Sprint iPhone 4S speeds. Some users were looking to switch providers, and others report that their Android phones were seeing better speeds. When we tested the iPhone 4S speeds across Sprint, Verizon and AT&T, Sprint offered up better speeds than most users were reporting, but still slower than AT&T. While our test was in one location, the reports are coming in from across the U.S.

Late yesterday, The Next Web reported that Sprint was circulating an email internally, and was aware of slow iPhone 4S data speeds. The email reportedly stated that, “Apple and Sprint are working together on a “confirmed nationwide issue”.” 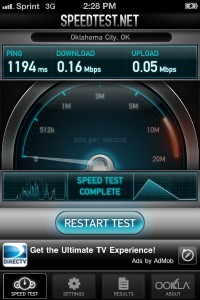 This morning, Sprint responded, offering up a real official statement on the iPhone 4S speed issues.

Overall, iPhone performance on the Sprint network is consistent with our expectations and the rest of our high-end portfolio. Sprint also did bench-marking of Sprint’s iPhone against competitor’s iPhones and the testing showed little to no performance difference. We are seeing a very low return rate for this device but we are watching the reports of speed issues very closely. We do see opportunities to optimize performance, specifically in high network capacity areas. We see this as typical optimization work and do not have any specific area of concern. Sprint is committed to providing the best possible experience for our customers. We are listening to our customers and working closely with our partners at Apple to ensure optimal performance of iPhone devices on our network.

While this statement essentially says that Sprint’s iPhone is just as good as the iPhone 4Ss on other networks, it does give us hope that the company is working on a way to speed up the connections in areas with a lot of traffic.

Hopefully these optimizations will help users with slow iPhone 4S 3G download speeds on Sprint. If you have a Sprint iPhone 4S, are you experiencing slow download speeds? Share good and bad speed results in the comments below.

The most common testing app is Speedtest.net. If you view your result, you can click the email icon and get the link to an image of your results, or you can upload a screencap of your test results to an online photo sharing site.