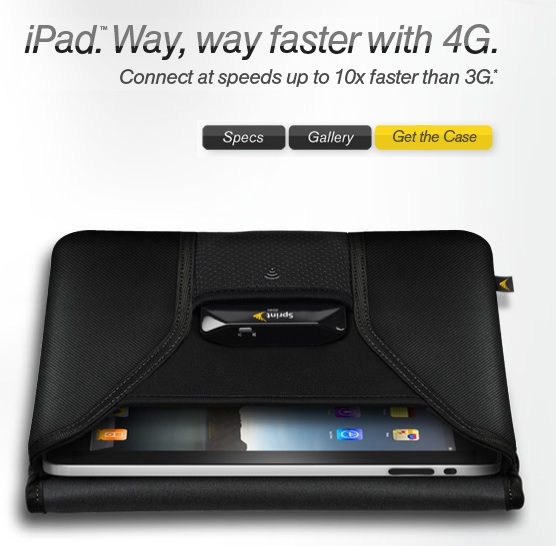 Sprint seems to be going all out with its quasi 4G push and the Overdrive. For those that don’t know the Overdrive is the portable modem that allows you to suck down Sprint’s broadband signal and use it with up to 5 devices as a WiFi connection. If you’re in an area where Sprint’s WiMax has been turned on, you can get the quasi 4G signal, otherwise it defaults back to 3G.

I say quasi, because there is a debate afoot about whether or not WiMax is true 4G, but then there’s a debate about the whole 4G labeling in any regard as well. Some think that calling WiMax (or any other next gen broadband) 4G is misleading marketing due to the actual increase in speeds you get. But then again we’re early in the roll out of anything that can be called 4G. I don’t think we’ll see Verizon’s version until next year. Sprint doesn’t either and that’s why the push.

All of that said, Sprint is pushing hard and trying to take advantage of the fact that its competitors haven’t rolled out their next gen broadband yet. Sprint just lit up Houston this past week. James Kendrick has some interesting posts on this, and one of them tells the tale of how he left Verizon and had some fun dealing with salesman hype and obfuscation when he was trying to end his contract there.

Sprint is also rolling out a promotion aimed at those who have or are going to have the gadget du jour, the iPad. They’re offering a case that has a pouch for the Overdrive built in. You can pick it up at Best Buy with a contract. The rush is on here, because the 3G versions of the iPad are coming out soon, and for most folks in the US, 3G is all you’re going to see on the Overdrive presently. (I think WiMax is available in something like 11 cities in the US).

If Sprint really wanted to follow through on this push I think they could do better. There are tons of MiFi users out there (the precursor to the Overdrive and 3G only) and while they might lose some revenue on the cards, I think they would gain more in the long run by offering MiFi users a trade up to the Overdrive.  Remember those MiFi users have a two year contract. Just roll the contract out for another two years, (most MiFi users seem really happy with their choice of device) because let’s face it, it will be awhile before Sprint’s WiMax will hit the rest of the country.

But, maybe they are afraid that when Verizon and others roll out their versions of 4G, folks will want to jump ship.