In addition to introducing the LTE editions of the Galaxy Nexus and the LG Viper for its network, Sprint also showed off a mobile hotspot for its LTE network that it is building out. The Sierra Wireless Tri-Network Hotspot will be compatible with Sprint’s 3G CDMA Network, the legacy 4G WiMax network, the 4G LTE network protocol that will pave Sprint’s future as part of its Network Vision strategy.

The model that we saw at the Sprint lounge was a non-working model, but the working model does have  a small LCD display that will give you access to information about the device, including signal strength, battery life remaining, and other information.

The device that we saw tonight had on an extended battery. Additionally, there are also ports to plug in external antennas to get stronger reception.

Sprint has yet to announce pricing or availability, except to say that the device will be available in the first half of the year.

The device also has an optional dock and charger. 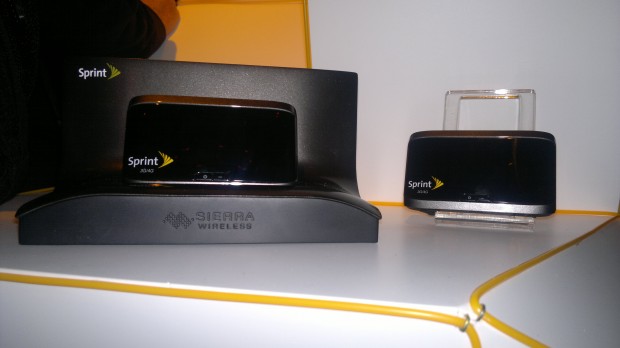