Motorola might have partnered with AT&T to get their version of the customizable Moto X out first, but it seems it won’t have been first to launch the device by much. Comments from one Motorola executive indicate that users on other networks could see the device launch within days.

The comments came by way of Motorola Mobility’s Punit Soni, who took to Google+ this afternoon to showcase a video that highlights that the Moto X is assembled in the United States. While the video itself doesn’t do much to focus on anything about the device other than its Fort Worth, Texas origin, the caption above the video does.

The Moto X counts on customization and always listening to draw in iPhone users.

According to Soni, today was just “Step 1” of the device’s rollout, saying that users can expect more versions of the Moto X flagship in just “days.”

By indicating “other carrier versions” as approaching their potential launch, Soni seems to be attempting to deal with the small backlash that’s cropped up since Motorola announced that the Moto X.Ever since it announced that it’s first true flagship device since being purchased by Google, would only be available to users on AT&T first, there’s been a steady rise in the number of users wanting to know when their carriers will be launching their own version. At the time of the device’s launch Motorola did say that it would be making the device available on other carriers over time.

In the United States users can look forward to being able to pick up the device on Sprint, T-Mobile and Verizon Wireless at some point in the future. Unfortunately, users who buy the device on any of these networks won’t be able to create customized versions of the device from the Moto X website. Only AT&T users will be able to use Moto Maker to restyle and choose colors for their device for the foreseeable future. 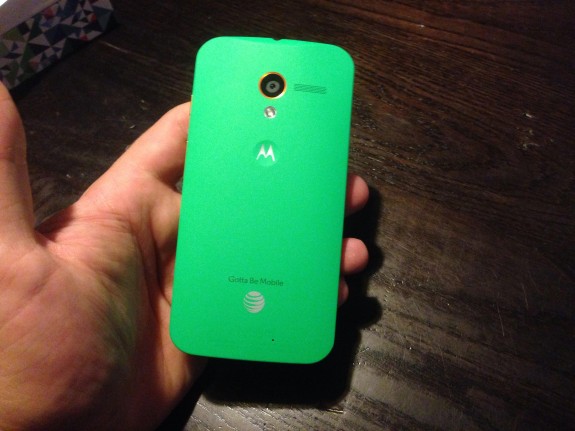 A customized Moto X on AT&T.

Verizon Wireless has confirmed that its users will be able to customize their devices using Moto Makr earlier this month, however it hasn’t given an exact time frame beyond “later this year.”

In addition to being the world’s first truly customizable device, the Moto X also comes equipped with some pretty high-end internals including a 4.7-inch 720p displaying, a 10 megapixel rear-facing camera and a dedicated processor that monitors sound and allows buyers to use the device without ever having to touch it.