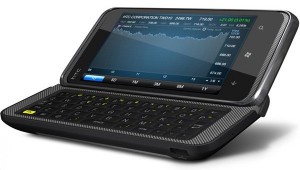 Sprint is teasing an HTC Windows Phone 7 device for Thursday, which is widely believed to be the CDMA variant of the HTC 7 Pro, a device with a sliding-tilting screen mechanism in landscape mode. According to Sprint’s original Twitter message, the carrier urges users to check back in on Thursday, February 24th, to find out more. However, a more subtle message follows, stating: “If you could design a brand new phone, what would it have? Ours will have a hub for gaming, music, pictures and video.” That second message, with its references to “hub,” “gaming,” and “music” imply that it is a Windows Phone 7 handset. 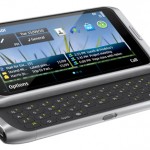 The form factor employed by the HTC 7 Pro would be the first for Windows Phone 7–a landscape oriented slider. Nokia, with its Symbian platform, has released a device with a similar form factor in the shape of the Nokia E7, which has been an evolution of Nokia’s Symbian-based designs that appeared on the N97 and the N97 Mini. It’s unclear if Nokia will continue to evolve the business-centric form factor of the E7 as it begins its venture into making Windows Phone 7 phones.

The landscape form factor affords a larger keyboard and can accommodate a larger display compared to a more tightly packed display and screen on BlackBerry-styled devices, like the Motorola Droid Pro and the BlackBerry Bold.

At Mobile World Congress, Microsoft had indicated that the company is finally ready to implement CDMA support for its Windows Phone 7 mobile operating system, suggesting that a release on carriers such as Sprint and Verizon Wireless are forthcoming. It’s unclear if this release will be a 3G-specific device or if the Windows Phone 7 debut on Sprint will come with support for the carrier’s 4G WiMax standard.