A leaked employee rewards document for Sprint’s retail stores suggest that the Now Network is gearing up to debut a mid-range Android smartphone made by Samsung for the carrier’s growing 4G LTE network. The phone, called the Galaxy Victory 4G LTE, will be a mid-range model that slots in under the Galaxy S III and the Samsung Galaxy Nexus on Sprint’s network. 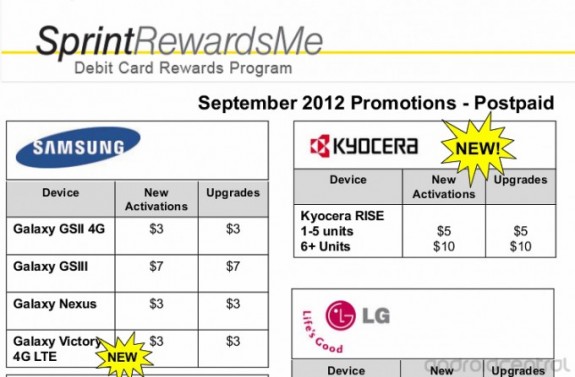 The inclusion of NFC capabilities suggest that the phone will be compatible with and may be preloaded with Google’s Wallet application, which aims to be a touchless digital wallet for making payments for goods online and in compatible physical retail stores.

The phone is expected to launch this month in September. Neither Sprint nor Samsung has announced nor confirmed the phone, so we do not know much else about the device at this time. In the past, we’ve seen leaks for a mid-range Sprint-bound Samsung phone with the model number SPH-L300 and the Victory may be that very same device.