Sprint will launch new prepaid phones plans under the main Sprint brand on January 25 according to an Android Police report.

The new plans fall under the new Sprint As You Go branding, and Sprint will limit the plans to just four phones at launch. Those four phones are two Samsung feature phones (Samsung M400 and Samsung Array, and two smartphones: the LG Optimus Elite and Samsung Victory. 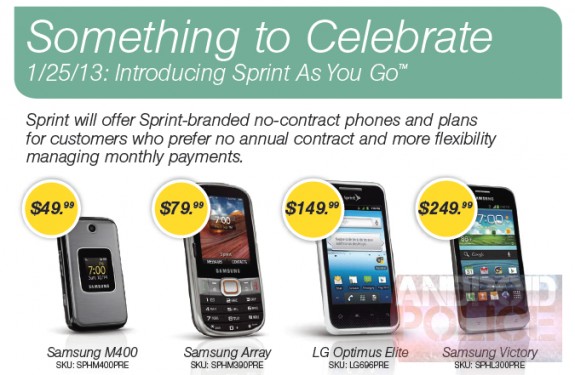 The new plans start at $50 for the feature phones which includes unlimited talk and text. The smartphone plans include unlimited talk, text and 3G data for $70 a month. Like all prepaid plans, Sprint As You Go doesn’t require a contract. Subscribers will receive updates of when to renew their plans at ten and three days before their service runs out, with no penalties for not renewing service.

Sprint As You Go Plans seem to have special rules against roaming on non-EVDO networks, but the leaked documents don’t go into much detail on those rules.

For now it appears Sprint will only bring specific phones to Sprint As You Go plans. Those phones have special SKUs that are different from their Sprint on-contract counterparts. The two current feature phones run outdated versions of Android (both seem to use Android 2.3 Gingerbread), and are relatively inexpensive for unsubsidized phones.

Sprint also offers prepaid phones under its Boost Mobile and Virgin Mobile brands. Both MVNO networks use Sprint 3G, 4G WiMAX, and will soon use 4G LTE. Both brands offer plans for $55 with talk, text and web, $15 less per month than Sprint As You Go. Virgin and Boost slow down data after 2.5GB of usage, however, which Sprint As You Go presumably won’t do.