A new over-the-air, or OTA, software update for the flagship Galaxy S4 by Samsung on Sprint brings a number of new features. For one, the software update will make your Galaxy S4 more secure, which will bring joy to IT administrators.

Update: Following our post, Samsung Mobile had reached out to us saying that Knox isn’t available as part of this OTA update.

“All framework components come standard on the device, and full-feature activation by solution providers and distribution channels will be available at a later date.”

Any references to Knox being available as part of this software update are incorrect.

Though Samsung had announced its Knox security software, which allows users to create a work and play partitions on their smartphones in a similar manner to BlackBerry Balance for enterprise users, when the Galaxy S4 was announced, the company had not ironed out all the kinks and promised that Knox would be coming at a later date. That date, appears to be now, for users on Sprint’s 4G LTE Now Network. 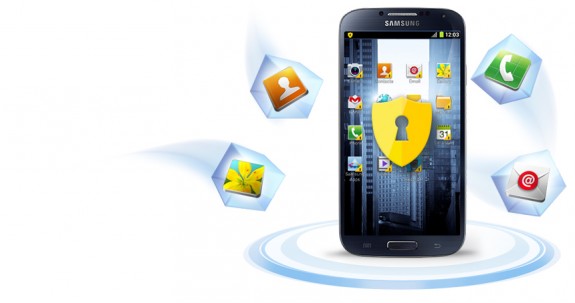 Knox is an important feature for the modern enterprise where users are bringing in their own devices and expecting to use them with corporate information, which may require added security layers. With the Galaxy S4 and Knox, enterprise customers can now do this–have a device that they like and purchased themselves and not have to carry a secondary work phone for their corporate information. It’s a single device solution that’s meant to be more secure.

The second feature that the software update brings is the ability to install apps to the SD memory card. One of the criticism with the Galaxy S4 is that the pre-loaded software already takes up quite a bit of chunk from the available storage. Thanks to a micro SDXC card slot underneath the removable rear battery door, users could augment storage, and now users can offload the installation files of apps to the SD card to maintain more free space on their device.

At this time, there is an on-going discussion at XDA-Developers on whether or not the Galaxy S4 update will lock the bootloader. Likely, for business users who want Knox, this won’t be a big deal but prosumers who want flexibility in installing custom, third-party ROMs may want to hold off on installing the update until we have official confirmation on whether or not the bootloader will get locked.