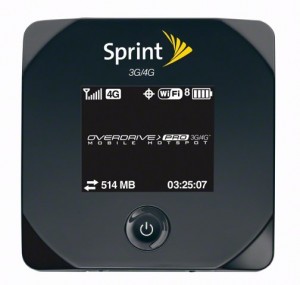 Sprint is releasing an update to its first 4G mobile hotspot router called the Overdrive. The new model, dubbed the Overdrive Pro 3G/4G Mobile Hotspot Router, is an incremental upgrade from the original model and provides some refinements and a lower price tag.

The new Overdrive Pro is still made by Sierra Wireless and will now allow users to connect up to 8 other devices over WiFi to Sprint’s 4G WiMax mobile broadband network. The original Overdrive only afforded up to five connections. Additionally, the LCD display on the top of the router, which displays network information, battery life, and connection status, is now 45% larger than the original Overdrive.

When users move out of a 4G coverage area, like Sprint’s other dual-mode 3G/4G products, the Overdrive Pro will default to Sprint’s 3G CDMA coverage.

The Overdrive Pro supports 802.11n WiFi and also comes with a micro SDHC card slot so you can insert a memory card and share files over your small network.

In addition to the Overdrive Pro, Sprint had announced at CES that it would soon be offering the Novatel MiFi 3G/4G mobile hotspot router. The updated MiFi now, like the Overdrive, also has a display screen to show network information whereas the original MiFi, which was 3G only, relied on various blinking colored LED lights to alert users of different statuses.

According to Sprint, “Beginning on March 20, customers will be able to purchase Overdrive Pro 3G/4G Mobile Hotspot exclusively from Sprint for $49.99 (excluding taxes) after a $50 mail-in-rebate with a two-year service agreement.”