It looks like Sprint will be joining its Galaxy S II carrier rivals AT&T and T-Mobile in offering Samsung’s flagship smartphone in white. Sprint’s variant, known as the Epic 4G Touch Galaxy S II, comes with a 4.5-inch Super AMOLED Plus display, a dual-core Exynos processor, and zippy performance.

It’s still unclear when Sprint will release or announce the white version of the phone, though speculation has it that the device may come in early 2012. 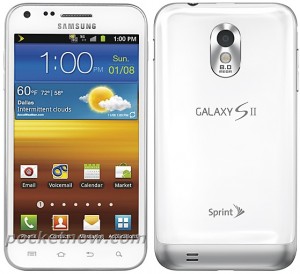 The leaked press photos of the white Epic 4G Touch comes by way of pocketnow. The white version is anticipated to maintain the $200 price tag of the current black version with a two-year contract when it gets announced.

The Galaxy S II is among the best Android smartphones today. Many users are attracted to the hyper-saturated Super AMOLED Plus display, which provides for rich, vibrant colors and dark blacks. The problem with that display is that the resolution is WVGA, which is less than many high-end phones using an LCD panel that come with either a qHD or 720p HD display. Samsung recently released a an HD Super AMOLED display on the Galaxy Nexus, which increased the overall resolution but doesn’t benefit from the brighter display, more vibrant screen, and better usability under direct sunlight that the Plus moniker affords.