It looks like after constant leaks and speculations, the 32 GB Nexus 7 tablet from Google is just a little bit closer to release. The 32 GB slate was recently spotted at the business portal of Staples’ website and pricing resembles that of the current 16 GB Nexus 7.

According to a leaked screenshot posted on Android Police, the 16 GB model retails for $251.49 on Staples and the retailer is looking to price the 32 GB WiFi model at just $248.37, or roughly $250 for either model. 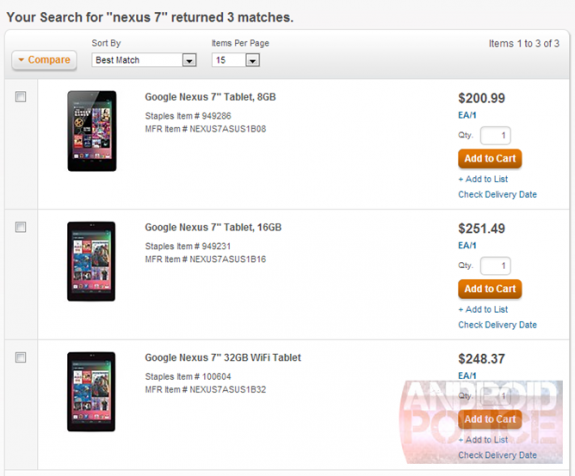 The boost in storage to 32 GB will be an important factor for those considering the Nexus 7 as the quad-core 7-inch device lacks a memory card slot so users won’t be able to expand storage at a later time. Instead, users are left stuck with the amount of storage they had chosen at the time of purchase and will have to make due with either streaming or cloud storage once capacity fills up.

Additionally, the increase to 32 GB will allow Google to match Amazon’s 16 GB and 32 GB variants of the 7-inch Kindle Fire HD slates. That model also has non-expandable storage.

There were also rumors of a 3G/4G tablet model in the past, but so far there is no news on a Nexus 7 with embedded mobile broadband; Staples’ listing for the 32 GB model indicates that it is a WiFi-only device.