Staples currently offers accessories for all of Apple’s major product lines, including the iPad, iPhone, Mac and iPod. The store offers a number of Apple-made accessories for each device. Unfortunately, Staples doesn’t appear to offer any discounts on the accessories at the moment. 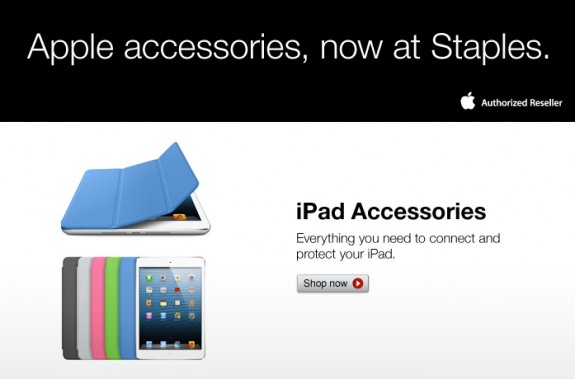 Every accessory and device Staple sells including Smart Cases, Magic Mice, the Apple TV and Airport Express all cost the same as they do in the Apple Store or other stores such as Best Buy. This is likely just another example of Apple’s retail strategy of selling its products to other retailers with small wholesale discounts.

Staples doesn’t currently sell any Apple devices such as iPhones, iPods, MacBooks or iPads. There’s a chance the move to selling Apple accessories will lead to the store selling more Apple devices. Staples currently sells a number of tablets including the Amazon Kindle Fire HD and Nexus 7, as well as a number of computer and laptops from myriad manufacturers.

If Staples did start to carry Apple devices, it would give Apple a wider reach for its devices. Staples has stores in more rural or less densely populated areas than Best Buy, Target or Apple. By selling iPads, MacBooks or iPhones in those areas Apple can reach users who may currently have to drive at least an hour to the closest Best Buy.

For users who can easily get to Best Buy or an Apple store, Staples selling Apple devices just means there’s another store that may eventually offer discounts on Apple devices.