This winter’s Star Wars: The Force Awakens starts not with a release of a companion comic book or look back at the previous movies. Instead, iPhone game maker Kabam and Disney are teaming up for Star Wars Uprising, what’s expected to be a massively popular iPhone game later this year.

Luscasfilm, Disney and Kabam announced Star Wars Uprising for iPhone and Android late yesterday in press releases. Star Wars: Uprising will launch only as a mobile game laser focused on the things that happened after the Galactic Emperor was destroyed on the Death Star and the start of the The Force Awakens film, which debuts this December. 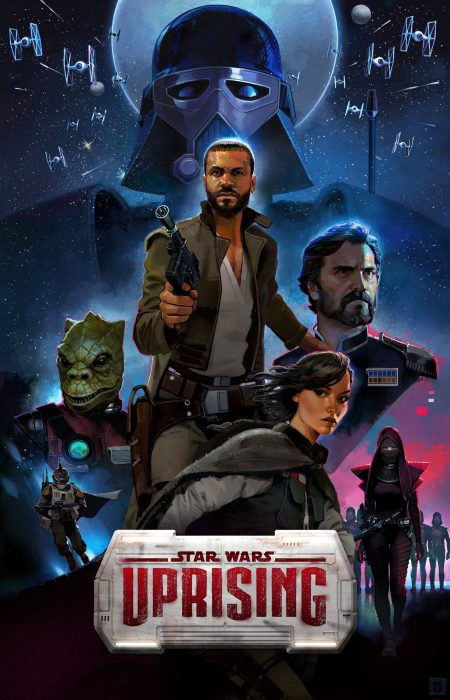 No, Star Wars Uprising isn’t some quick action game or endless runner in the same vein as most popular iPhone and Android games. Instead, it’s a role-playing game. Kabam hopes that users will get immersed in the Star Wars universe through the game. Players will be able to create their own characters. Through completing tasks in the game they’ll earn currency to upgrade their character and pick up new abilities. Kabam also says that players will be able to create “a powerful crew and cartel to join in large-scale sector wide battles,” which sounds like an interesting game mechanic depending on how the combat works.

The story missions are set in the Anoat sector, which is were the Battle for Hoth and the Cloud City heavily featured in the first trilogy are based.

The developer is also promising real-time co-operative multiplayer, just like you’d expect on a video game console. Most mobile games use turn-based multiplayer, which isn’t nearly as immersive or seamless, generally.

A Star Wars Uprising trailer out today doesn’t give iPhone users a detailed look at what they can expect in the game’s combat, but does hint at some of those aforementioned classes. We see a member of each of the classes mentioned in the press release all finding out about the destruction of the Death Star. We also hear a general in the Imperial Army declaring that rebels and the criminal underworld won’t be allowed to take advantage of the Emperor’s death or they’ll have to deal with him. He’s surrounded by Storm Troopers wearing their iconic white survival suits.

All told, it’s hard to imagine that die-hard Star Wars fans won’t want to prepare for the release of Star Wars: The Force Awakens with Star Wars Uprising. As an RPG, there should be enough content to make it a must-play for anyone who wants to learn more about how life was in the Galactic Empire immediately after Vader and Palpatine’s demise.