In a nod to the environment, Starbucks is ending its free iTunes download cards where users can grab a physical card–the size of a business card–at a cafe counter and enter the special promo code in iTunes to download free content ranging from MP3s to books and apps. The program, according to the coffee chain, is not ending and Starbucks is just migrating the free promotion digitally. This makes sense. After all, you are downloading digital content, so why shouldn’t the code itself be distributed digitally to save trees? 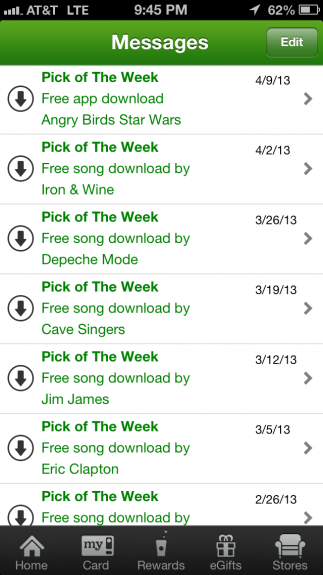 Instead of picking up a card, Starbucks patron would now need to either launch the app on their smartphones or hop onto the complimentary WiFi while patronizing the coffee shop to get the free downloads.

At present, Starbucks make official apps for the iOS and Android platforms. There is no such Android Google Play Store freebie, but iPhone and iPad users with the app could launch the Starbucks app, go to the Home tab, click on Messages, and then download the ‘Pick of the Week.’ At present, that would be the Angry Birds Star Wars edition from Rovio, which is normally priced at $0.99.

Not only is the move to digital a benefit for the environment, it’s also easier for consumers. Rather than redeeming a string of numbers that users would have to key into iTunes, launching the download from an iDevice would automatically open the iTunes store on your iPhone, iPod Touch, iPad, or iPad mini and all you need to do is enter your iTunes ID password to download. No more entering strings of randomized numbers.

And while there are clear benefits to the move, there may be some marketing drawbacks. Would users remember to check for the download every week? The benefit of the card-based system where physical cards would be distributed is that it’s a visual cue for users to pick up the card at the cash register. Without the cards, users may not get that reminder unless Starbucks places signs or reminders in their stores. We’ll have to see if download redemption rates for the promotion decline as a result in Starbucks and Apple moving towards a paperless freebie.