Starting Rehearsals and Making Script Changes with an iPad 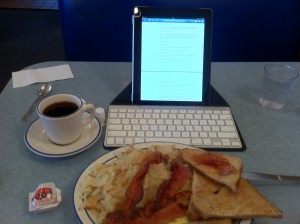 Today started a 2 week crazy period where I’m running back and forth between Wayside Theatre where I work full time and Totem Pole Playhouse where the musical play I co-authored, Southern Crossroads, is being produced. I’m also directing the show there as well. This morning I realized we needed to make a few script changes before we had our first read-thru with the cast, so I sat down for breakfast at a local diner, The Pink Flamingo, and pulled out the iPad 2 and did the edits and rewrites in no time flat on the iPad using QuickOffice. The files were saved over to my MacBook Pro via Dropbox and tonight I’ve used the Automator function I described in this post to turn the new changes into an eBook so I have it handy for the beginning of staging rehearsals in the morning.

We’re off and running.