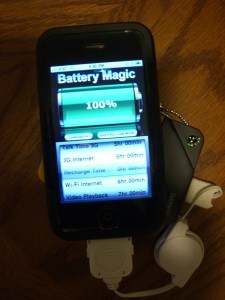 Despite being a mobile computing enthusiast, spare batteries and external battery packs have never played a role in my gadget arsenal. My first Tablet PC, an Electrovaya SC500, packed a 12-hour, 140 Whr battery, and now I rarely need more than a couple hours of battery life at a time. Not being chatty, I don’t wear down my phone and am rarely far from a power outlet, at my home, office or car, for long. But for an upcoming event, I’ll need to be mindful of my batteries, so I’m exploring ways to stay charged. I’m going the traditional route of a spare battery (possibly two) and charger for my Tablet PC (and I already have one for my camera), but for my iPhone, I’ve chosen a different route: a USB pack powered by AA batteries.

My initial thought was to build one out of an Altoids tin, but there are a lot of steps involved, so I looked into the consumerist route and found the Datexx USB power pack. Pretty much the same thing except already built. Priced around $20, but it can be found for less, most notably at Buy.com. Cheap enough to give it a try. 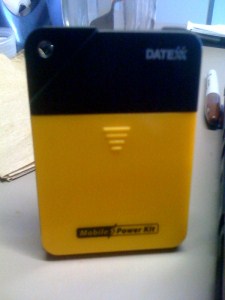 And try I did. First test was with some NiMH rechargeables I already had, Rayovacs rated at 2100mAh. Being NiMH batteries, their voltage is limited to 1.2V each, 4.8V combined, just shy of the 5V typical of USB. That’s about 10 Whr, not quite double the juice of the iPhone’s 3.7V, 1400mAh battery. Sounds like it can keep my iPhone running for more than double its norm, but that’s idealized. In practice, and due to the batteries being used, it doesn’t work out that well. It did manage to play a whole two-hour movie (Star Trek) without a dip in my iPhone’s internal battery. I picked up a fresh pack of Duracells (2650mAh) for further testing. Through a day out with regular not constant usage, they kept my internal battery topped off, which was confirmed again the next day.

Charging the internal battery has been a less successful venture. Keeping the internal battery topped off and charging when it dips to 90% has not been a problem. Charging it from 60-70% has been inconsistent. At that point, even when the batteries are freshly charged, the iPhone tries to draw more current than the pack can supply. When the current is steady, the green LED on the Datexx is solid green. When the current is too low, the LED flickers rapidly. This is a disappointment but does not conflict with my envisioned usage scenario of drawing from the pack first and relying on the iPhone’s battery when that runs out. Charging always works when the phone is off, but that defeats the purpose for me. 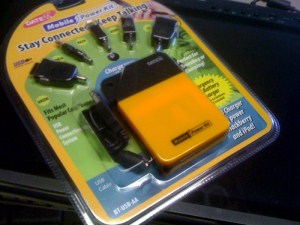 As to why I chose this route over the typical Li-Ion pack, even though I have no plan to switch from my iPhone, I wanted a universal solution to keep it useful in alternate circumstances. Following that same line of thought, I wanted a solution that used AA batteries so I could put the batteries to use after the event is done and easily replace them when the need comes up later. Having two sets of batteries gives me an easy refill. Also, in an emergency, fully charged replacements are widely available.

Another perk of the pack is the small hole at the top for a chain or ring. I ran a small chain through it so it can hang from my belt key ring, right under my iPhone. I have it tethered with a retractable cable to avoid dangling and tangling. It also comes with a bevy of charging tips, including one that works with my wife’s phone, so its usefulness to us is already expanded.

Overall, I’m pleased with the system. I wish I could rely on it for charging under a wider range of circumstances, but again, the way it does work suits my needs. Going to have to pretty it up though. I wasn’t going for looks, but construction yellow doesn’t really go with my style.