Took a trip home to Hawaii the other week. A bit last minute so I had to leave the wife (and cats) behind. It was basically a repeat of a trip I’d taken six years ago. Not much changed there, but my connectivity options this time sure did.

So a little backstory… 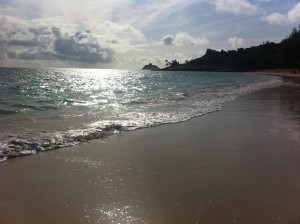 I grew up in Hawaii so, while relaxing, a trip there often feels more like a stay-cation than vacation. This particular trip was a little last minute and my wife had a trip of her own planned for later this year, so I went alone. Fine enough as I had some chores to take care of there.

Last time I went back home was six years ago in a little adventure I documented on my personal blog under the title “Hawaii Ink“. I didn’t quite repeat that experience but I did revisit an Internet cafe and post a video of myself eating shave ice. Big change this time was I had an iPhone, which made staying connected a whole lot easier.

Photo Stream is a dream

Again, my wife stayed home this trip. Main means of communication between us stayed the same: phone and email. I did have Wi-Fi where I stayed, so Facetime was an option but my wife is normally camera-shy anyway. (Oddly she likes to use it when she’s away, so I’m starting to suspect that’s mostly so she can see the cats. not me.)

What really delivered for us was Photo Stream. Photos I snapped of food and scenery (two top attractions of the islands) were sync’d when I was on Wi-Fi, primarily overnight. They showed up automagically on my wife’s iPad in the Photos app, no instruction required. We could not have asked for a more seamless and effortless photo solution. 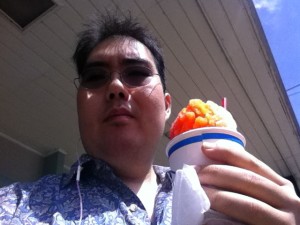 Six years ago, I shot and posted a video of myself enjoying shave ice, an island treat of finely shaved ice and flavored syrup. I shot that on a point-and-shoot camera, went home to download and process it on my Windows XP Tablet PC, and then uploaded it while I did other things. I didn’t time the whole process, but it took a while.

I did it again this trip, but this time the process took minutes, all on the same device. Shot the video from my iPhone 4, processed it in iMovie, and uploaded it to YouTube over 3G, almost entirely on the go. I literally assembled it outside at a picnic table while waiting for my brother to show up. Even my Windows 7 Tablet PC today cannot do all of that with such ease.

Backing up to iCloud

Normally I sync my iPhone to my media PC at home using Wi-Fi sync. Works great for my normal routine, but being thousands of miles from home is not part of my normal routine. Rather than switch my backup destination to my Tablet PC or go without my daily backup, I gave iCloud a shot.

As Josh has repeatedly reported, iCloud backup can cost you some bucks if you use multiple iOS devices and/or have a lot of data to backup. However, with only the one iPhone, the 5 GB freebie storage proved more than adequate, especially because I had cleared my camera roll ahead of the trip.

Counting the photos and videos I had taken, I ended the week with 2.2 GB to spare in my 5 GB allotment. If push came to shove, I could have economized that even further by deselecting apps to backup, such as the DC Comics app, which I had loaded with comics for the long ride there. Pushing further, I could also have deleted photos from my camera roll that were already in Photo Stream (which I further backup in Evernote). Coupled with other cloud services and iCloud features, that 5 GB freebie can stretch a lot further than you may think. 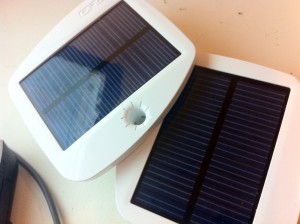 The flight time to Hawaii from Virginia is about 13 hours not counting stopovers. In addition, I had no set schedule to allow for regular recharging. Clearly I’d need a battery backup solution if I intended to use my iPhone extensively during the trip (and I did). As it happens, I had just picked up a new one to try out.

I purchased a Solio Bolt solar charger and battery pack for another project a few days before deciding on the trip. It has a 1 amp output option specifically intended for the iPhone and easily doubles the iPhone’s runtime with 2,000 mAh capacity. It is a happy coincidence that I could test its solar charging while in sunny Hawaii (though I charged it mostly via USB). It really saved me from any worries over making any charging pitstops.

Backing up the backup was a Griffin TuneJuice, which I previously purchased as my primary backup solution. I chose it because I don’t normally need a backup battery and this works on an as needed basis using standard AA batteries. It came in handy on the flight from LAX to HNL when I ran down both my iPhone battery and the Solio by playing Angry Birds after reading digital comics while listening to music. Brought my battery out of the red for when I called my mom after landing.

The rest of the trip, I carried the Solio in my pocket to charge as needed, essentially giving me a power outlet in my pocket. I was not inconvenienced by the need to charge my phone once. 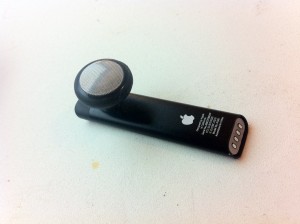 The final bit of tech I had to consider was headphones. I have Motorola Bluetooth stereo headphones, an Apple Bluetooth headset, and the standard iPhone headphones to choose from. I went with the latter two. I skipped the Motorola set because it would have been one more thing to charge. (The Apple BT headset charges on a special iPhone dock cable – no extra charger required.) I don’t normally carry my Apple BT headset except when I expect to have to be in contact with people. That was certainly the case on this family visit with fluid scheduling. The standard headphones were used for listening to music on the plane and also on the beach. More on that in my other post on the joy of voice control.

Six years ago, when I made my trip home into a tech adventure, my use of mobile technology was clumsy and obtrusive. This time, it was effortless and invisible. I didn’t have to do anything after initial setup to share photos with my wife. Tech tasks like posting video was accomplished during spare minutes. Backup happened automatically overnight to the ever-present cloud. Charging and recharging were never a worry.

As Warner keeps pointing out, a big plus of mobile computing is simplicity. We are still definitely on a quest on that front, especially with natural interfaces like voice control, but the strides we’ve made in these past few years, driven in no small part by Apple, are truly amazing.