The Steam Summer Sale, a yearly event that takes PC games and makes them available to all at ridiculously low prices without any sort of membership plan, is heating up. Already the sale includes crazy cheap copies of Far Cry 3, Dead Rising 3 and The Witcher 2.

The Steam Summer Sale is made up of differently daily deals and limited time deals that users are able to vote on themselves. Right now the Daily Deals portion of the Steam Summer Sale includes PC versions of Dead Rising 3 for $37.49 and Far Cry 3 for $7.49. That copy of The Witcher 2, is an absolutely affordable $3.99.

Other PC titles included in the daily deals include Democracy 3, Day Z. As the name suggests, these deals will disappear at some point in the future. That means PC gamers are better off purchasing these titles as soon as they can. New Daily Deals will appear on the Steam website every day at 10 AM Pacific Time for the entire duration of the Steam Summer Sale. This isn’t some limited time event either, The Steam Summer Sale is massive and will run from now until June 30th. 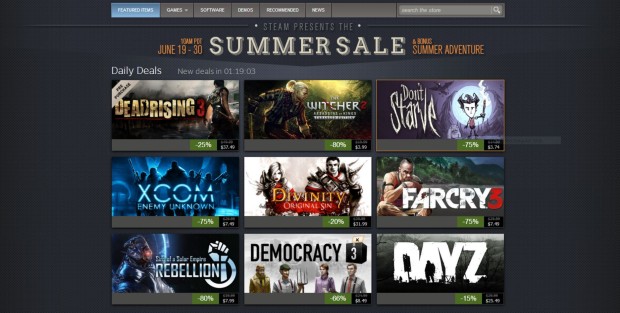 In addition to these Daily Deals, Steam is also packing in what it calls Flash Sales. The company will post new Flash Sale items every 8 hours for the duration of the Steam Summer Sale. Typically, these titles aren’t big budget high-profile titles. For example, Euro Truck Simulator 2 is available for $3.74. Additionally, the independently developed and critically acclaimed Super Meat Boy is available for just $3.44.

If the Steam Summer Sale shows us anything, it’s that there are some situations where PC users win out over their console counterparts. Both Microsoft and Sony now include free games with their membership services, but the deals they offer aren’t anything compared to the Steam Summer Sale. When either does offer a deal that’s competitive users are required to have a membership to either the PlayStation Network or Xbox Live. Both companies charge users $9.99 a month for that.

Before buying, PC users will want to download the Steam desktop client and make sure that these games are capable of running on their system. Unlike console gaming, PC gaming is full of gotchas that inexperienced users could find themselves affected by.

Console gamers don’t have to worry about checking to see if a game will run on their Xbox One or PS4. That’s not the case here, the amount of graphics power, and RAM a device has are very important here. Users who don’t know what either of those things mean should head to each game’s page and compare what’s in the System Requirements area of each game with the configuration that’s shown in the System Properties area of their Windows PC’s settings. It is worth noting that most games on steam include external controller support so that users can plug in their Xbox One or PS3 controller instead of using the keys on their keyboard.

Those who are worried about Steam being a trick to get their credit card information shouldn’t be. Steam has offered PC games for years and absolutely dominates the PC gaming space. The service is akin to Xbox Live and has a desktop client that can be installed on a PC and Mac. Recently, Steam expanded its offerings. There’s now a PC software store that offers users everything from video editing software, to sound boards and audio mixers too.

Users don’t actually have to provide Steam with their credit card and billing information. Getting these games are as simple as signing up for a free Steam account and then picking up a pre-paid card in $25 or $50 increments from a local gaming retailer. Both Walmart and Target offer free prepaid Steam cards. So too does retailer GameStop and even 7-Eleven.