It only takes a visit to an Apple Store to grasp just how many iconic products the company has produced. From iPhones and iPads to Macs and iPods, their products have owned the digital age like no others. Their vision not only led to enormous wealth for them, but also to a central place in our culture. Like The Beatles or Michael Jordan, they have been a force that has both reflected and shaped our era.

And as well all know, of course the mastermind behind all of this has been CEO Steve Jobs. In addition to his vision, Steve Jobs’ extreme control in enforcing that vision’s fruition has been the main driving force behind Apple’s blossoming into iconic status. 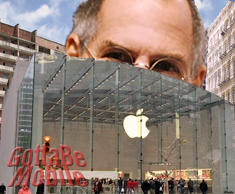 Jobs is known for overseeing everything that happens at Apple.

Having been on medical leave since January, sources are saying that Jobs is no longer applying his customary micro-managing style to Apple. The source does add that Jobs “calls in every day,” and is still guiding the big picture decisions. But any step back for this dictatorial leader could mean that things are changing behind the scenes.

They tell me he calls in regularly. He talks to Tim, he talks to the top guys, he talks about the Apple stores. But while he used to micromanage everything in ways that most CEOs would not, right down to issues with the company cafeteria, the big change with his latest leave is that there’s less micromanagement and more management of his executive team and the big-picture issues.

While this news would be no surprise if we were talking about any other CEO on medical leave, it does raise eyebrows when it’s Jobs that we’re talking about. Just last month, it was reported that Apple’s board was already talking to potential replacements, and that the CEO hiring process was in full gear.

Jobs called it “hogwash,” but with the news’ potential effect on Apple’s stock, he has every reason to cast doubt on it. During his previous medical leaves (in 2004 and 2009), Apple’s stock rose and fell along with news about his health. The market may be confident enough in the groundwork that Jobs has laid not to fluctuate too much about news like this anymore, but investors still take any headline relating to Jobs very seriously.

Whether sooner or later, there will come a time when Apple has to move on. Just as The Beatles broke up and Jordan retired (several times), the Steve Jobs era will be ending at some point. But unlike the 1999 Chicago Bulls or Ringo Starr’s solo career, Apple has shown that they have the pieces in place to continue those winning ways long after Steve Jobs has left Apple.

With Chief Operating Officer Tim Cook helming the day-to-day operations during Jobs’ absence, Apple certainly hasn’t been hurting. In fact, it’s safe to say that what they are doing represents the polar opposite of hurting. They are in as dominant a position as they’ve ever been in, with shares currently trading at around $390. They are the biggest company in tech, and are one of the richest companies in the world.

At this point, you could even say that Jobs’ eventual departure from Apple may be more of a symbolic shift than a practical one, as his fingerprints are as much a part of the company’s DNA as the once-bitten Apple logo is. While his leadership will be missed, don’t think those Apple Stores will be any less full of iconic gadgets after he steps down.