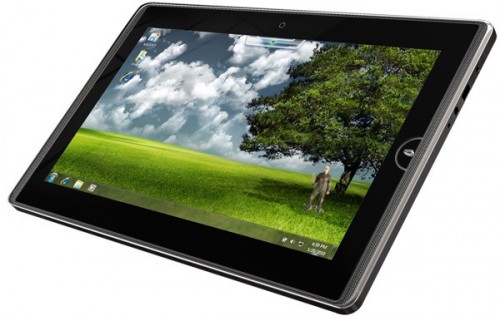 Asus honcho Jerry Shen is talking Tablets and prices and info and it all boils down to still playing wait and see. Although in some cases that window is getting smaller. Essentially we’re hearing about three different versions of the Eee Pad and also the Eee Tablet.

First up is the Eee Tablet. It’s essentially a reader from what I can tell, with a greyscale screen. It is due in October and has dropped from a $500 price tag to $300. That still sounds steep for something that is essentially an ebook Reader.

The Android version (EP101TC) isn’t scheduled to hit consumers until (wait for it…..) March. Shen is saying the price tag will be less than $399 for the 10 inch slate.

The Windows 7 version (EP121) will set you back $1000 or so and is targeted at the high end. Shen is saying the high price tag includes a docking station for the 12 inch device that allows you to turn it into a laptop.  Shipping is loosely pegged as December or January.

The Windows Embedded Compact 7 version might show itself in January with a price under $499 for the 10 inch device.

I wouldn’t take any of this to the bank just yet.

Via PCWorld and just about everybody else.