Still Lining Up for the iPhone 3GS 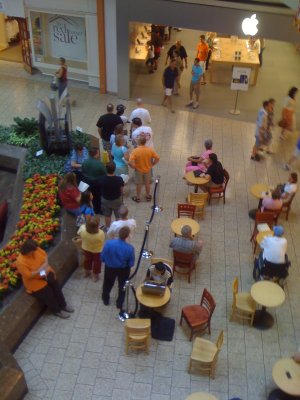 Dropped into the local Apple Store today while running other errands to see just how fast the iPhone 3GS really is. One word: blazing. The one I tried was on 3G, not wifi, and it displayed web pages faster than my iPhone 3G on my home wifi. Video recording was smoother than my digital camera too. Granted, my camera is a few years old, but it’s pretty snappy. I think I can still restrain myself from diving into an upgrade, but I understand the allure… to an extent.

What I don’t understand is these guys I saw from the upper level of the mall. I stood in line to get my iPhone ticket and then returned later to pick it up, but that was before you could order one online and receive it a few days later. When I do fall victim to the upgrade bug, that’s what I’m doing, not standing in line for hours. (And I’ll probably also be buying an iMac for my wife at the same time.)

Oh, one funny thing I saw: after I snapped the shot, I noticed a TV off to the left was playing a Microsoft PC ad. Didn’t stop folks from going into the store though.