It looks like for those who are looking to do FaceTime video chat on the go, Apple’s new iPad, which supports fast 4G LTE mobile broadband over AT&T’s or Verizon’s network, still does not allow for video chat over mobile broadband. When Apple debuted FaceTime on the iPhone 4 on 3G, there were speculations initially that the quality of chat over 3G networks were not up to Apple’s standards, but subsequent jailbreak hacks to enable FaceTime over 3G shows that quality was often not an issue. This led to speculations that Apple was constrained by carriers who may not want bandwidth-intensive apps like FaceTime to utilize data. 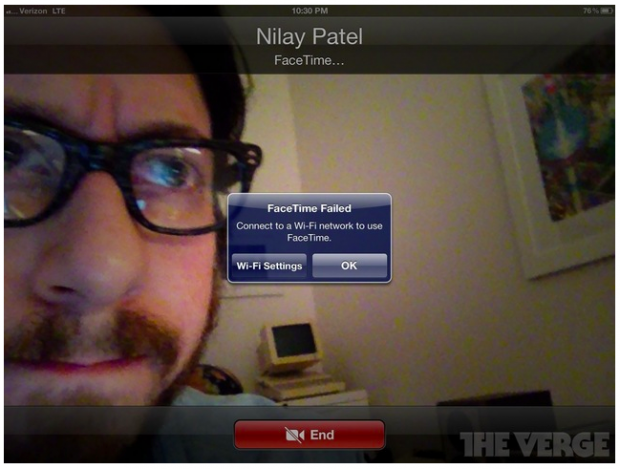 The issue here with 4G is that not only does 4G support faster download and upload speeds when compared to 3G, the latency, or delay in response time over 4G, is also much lower than on 3G networks. This means that as good as FaceTime was hacked to work on 3G networks, it would be a lot better on 4G LTE networks.

It’s unclear if Apple is still in negotiations to deliver FaceTime over 4G so that users don’t have to resort to a jailbreak solution.

At the iPhone 4 announcement, late Apple CEO Steve Jobs alluded to a future where FaceTime would work over mobile broadband network. If FaceTime does work over 4G, it would give iPad owners a way to at least communicate with other iOS owners without having to have a phone on them. Perhaps, this is a bigger threat to mobile carriers, who want users to have multiple devices that are tied into their network. As the iPad with 4G is sold without a contract and does not require any contract to activate or terminate the mobile data plans, carriers may be wary of not having a lock on subscribers.