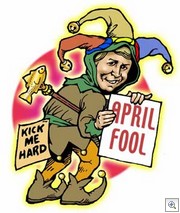 Sometimes in the crazy, wacky world of tech some stories, no matter how real, sound like April Fools Day leg pulling no matter when they come out. They could be true, they could prove not to be, but who knows.

And then there are some real April Fools pranks out there.

As usual Google has a bunch. TechCrunch round them up.

James and Kevin at jkOnTheRun have some fun with the iPod Grope and the MacBook Helium.

And I’m sure it will go on for awhile yet today.