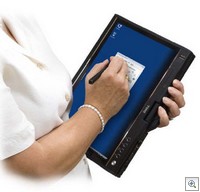 Silence can be deafening, but then again it might be too early to judge. Usually after the release of a new Tablet PC, the OEM specific forum here at GBM is lit up with posts from eager buyers proudly proclaiming that they’ve just ordered, and also posts asking questions about configurations. That’s not the case this week after Dell has finally put their new Latitude XT Tablet PCs up for ordering.

Eagerly anticipated, and loudly and roundly criticized for the high price point, I’m thinking that high price point is probably a major factor in the silence we’re hearing in the GBM Dell Forum. Anybody ordered one yet? Anybody thinking about it?